Islamic extremist Anjem Choudary has compared British soldiers to Nazis. He has been condemned by moderate Muslims for his reprehensible remarks. 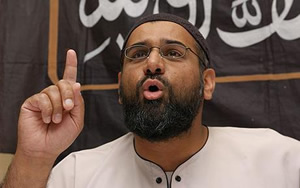 “We don’t have conscription in this country, you can freely join the army and leave at your will, and you know, if it’s just a matter of doing your job one can make comparisons, of course, with Nazi Germany in the Second World War, they could say that they’re just doing their job.“

When pressed he added:

“I think if you look at the atrocities which were committed during the Second World War, a comparison can be made, a good example of that is bagram air base and the case of Aafia Siddiqui, you know a Pakistani woman who was raped continuously, her children were incarcerated and she suffered, you know, a horrendous torture at the hands of the alliance who are occupying afghanistan at this time.

“You can compare that with some of the concentration camps in Austria and other places during the Second World War.”

The comparison with Nazis actually applies to Mr Choudary himself, the various organisations he has represented and his allies, for whom extreme anti-Semitism is never far from the surface. In 2002, Choudary acolyte Iftikhar Ali was found guilty of inciting racial hatred for distributing leaflets for al-Muhajiroun – of which Choudary was right-hand man to then head Omar Bakri Muhammad – that called for a Jihad and said:

“The hour will not come until Muslims fight the Jews and kill them.”

“What is written on the paper is true. The Jewish people must die.”

Choudary, who is planning to march through Wootton Bassett under the Islam4UK banner – a platform for al-Muhajiroun, has been criticised for his remarks by mainstream Muslims. Dr Shaaz Mahboob, Vice-chair of British Muslims For Secular Democracy (BMSD), told Left Foot Forward:

“We stand shoulder to shoulder with the people of Wootton Bassett and the Armed Forces. The vast majority of British Muslims accept our Armed Forces are doing an admirable job under exceptionally difficult circumstances. It is only because of the sacrifice of these brave soldiers that extremists like ‘Islam4UK’ are able to protest freely.

“Anjum Choudary and his followers betray everything this country stands for and the very constituency they claim to represent, which is ordinary British Muslims. We plan to hold a counter-protest to demonstrate that ordinary Muslims are deeply opposed to the values of Islam4UK.”