The dominant media meme in the wake of the pre-budget report continues to be the alleged need for government cuts. This has now taken a shriller tone. 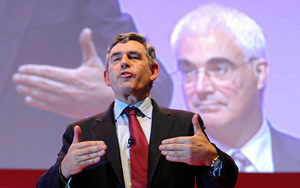 The dominant media meme in the wake of the pre-budget report continues to be the alleged need for government cuts. This has now taken a shriller tone, with allegations of a rift between Gordon Brown and Alistair Darling over how deeply to cut.

Brown is being cast as the bad guy in this; as resisting Darling’s ‘prudent’ desire to come up with real cuts in this pre-Budget Report, rather than delaying the ‘necessary’ cuts until 2011.

However, as Tony Juniper argues in today’s Independent, the hysteria about the ‘need’ for cuts is all wrong. The Green New Deal Group have just published their second report, to discouragingly little fanfare. This important document presents a powerful blueprint for how Britain could stabilise its economy, through a further and thoroughly-green expansion of ‘quantitative easing’.

This could enable us to avoid a repeat of the ‘Roosevelt recession’ – the kind of downturn through premature cuts that occurred in the States in 1936-8, and would occur here too, if the Liberal Democrats and the Conservatives got their way and put into place the ‘savage’ cuts they are promising.

Cuts are not needed, certainly not at this time. The beauty of green Keynesian measures is that they pay for themselves, in that they guarantee future savings (lower fuel bills etc) that will repay any elements of the package which do not already pay for themselves through their positive effect on the economy.

The current attacks on Brown, then, are completely misplaced. The government should take more pride in not putting spending cuts into place. This should mark a clear dividing line between Left (Labour and Greens) and Right (Tories and Lib Dems). But at present it does not – because the government has not resisted openly the cuts meme – and because it has not bought into green Keynesianism in any meaningful way.

It is an incredible disappointment that the PBR did not embody substantive moves towards a Green New Deal (except for the boiler scrappage scheme, brilliantly and now-successfully promoted by Mick Williams.

At this time of all times, with Copenhagen in the balance, the need for leadership and for us to think of the future should have been manifested in Darling’s proposals. That, and not the welcome absence of public spending cuts, is the real scandal of yesterday.