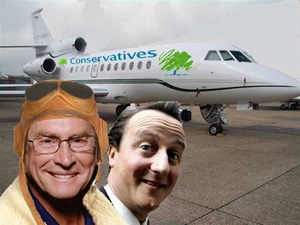 David Cameron’s reverse gear swung back into action last night as he hastily withdrew an amendment to the Constitutional Reform bill which he claimed would force all Parliamentarians to be full UK taxpayers.

The amendment would have applied only to MPs and Peers “treated by Her Majesty’s Revenue and Customs as being domiciled and ordinarily resident in the UK” – crucially exempting Tories like Lord Ashcroft who, by classifying themselves as merely “resident” and not “ordinarily resident” could avoid paying UK tax on their overseas earnings.

Though undefined in the Tax Acts, HM Revenue & Customs document HMRC6 – “Residence, Domicile and the Remittance Basis” – outlines the difference between “resident” and “ordinarily resident” status:

Resident but not Ordinarily Resident:

“For example, if you are resident in a tax year because you have been in the country for more than 183 days but you normally live outside the UK, it is likely that you are not ordinarily resident.”

Ordinarily Resident but Not Resident:

“You can be ordinarily resident in the UK but not resident. For example, if you normally live in the UK but, during a tax year, you have gone abroad for a long holiday and you do not set foot in the UK in the tax year. This is very rare.”

Prior to the volte-face, Justice Secretary Jack Straw had said:

“Read the small print of the Tory amendments and you’ll find a loophole that would enable individuals to escape UK tax on their foreign earnings. It looks like Lord Ashcroft clicked his fingers, and Mr Cameron jumped.”

“It is deeply embarassing not to say inept that they couldn’t even draft a simple amendment which made sense – either that or they hoped no-one would notice an extraordinary attempt to keep Lord A out of this issue.”

Mr Cameron had hoped the amendment would draw a line under a series of damaging stories about Tory tax avoidance. Yesterday Left Foot Forward highlighted the Conservative leader’s poor response to the scandals, and on Sunday the Observer calculated that Zac Goldsmith “avoided £5.8m tax” as a non-dom – this despite him claiming his nom-domiciled status “delivered very few benefits”.

Labour Deputy Leader Harriet Harman, standing in at PMQs, has just said that all lawmakers who are “domiciled, resident and ordinarily resident”, would have to pay tax, saying there should be “no representation without taxation”, and for the Liberal Democrats, Vince Cable has demanded Lord Ashcroft be disbarred from Parliament.