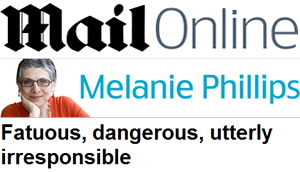 Melanie Phillips in the Daily Mail today has backed Alan Johnson’s decision to sack Professor Nutt. You can read her full article here.

She makes a number of claims about Professor Nutt’s work, which are worth addressing:

Firstly she suggests that Professor Nutt is not a voice of scientific reason and that his claim that ecstacy is less dangerous than horse-riding is “fatuous”. She says:

“This fatuous argument was shredded by one of the country’s leading experts on ecstasy, Professor Andrew Parrott, who said that ‘nearly every statement Nutt made about the effects of ecstasy was incorrect’ and ‘displayed a staggering disregard for the empirical evidence’ which showed that ecstasy was at least as powerful as cocaine.”

I had not heard of Andrew Parrott until I read Ms Phillips’s piece today but he is apparently a Professor at Swansea University. I found a post for the “Addiction Today” website done by him in November last year which is an open letter to the ACMD in which he criticises their advice on ecstacy. The Professor seems very dismissive of meta-analysis in his post on the site which the ACMD have apparently used.

There are organisations such as the Cochrane Collaboration which have actually made significant scientific breakthroughs through the use of this method. You also only have to read through the comments below Professor Parrott’s post to see that there are plenty of people who take issue with his approach. The bottom line here is that the ACMD is made up of eminent scientists in this field and they came to a conclusion based on their evidence and research.

I am not sure why Professor Parrott was not on the ACMD himself but the idea that his view “shreds” the findings and recommendations of the ACMD seems very far fetched.

Phillips then moves onto Cannabis:

“Other scientists have also come out against Nutt. According to experts such as psychiatrist Dr Robin Murray, there is significant evidence that cannabis triggers psychosis and schizophrenia.

“Even the Government’s own National Director for Mental Health, Professor Louis Appleby, told the Advisory Council last year that cannabis should be reclassified as more harmful because there was now sufficient evidence that it could contribute to a pattern of relapse and risk in mental health patients.

“Nutt claims his arguments are ‘scientific’. Does that mean that scientists such as Professors Parrott and Appleby or Dr Murray are not scientific?”

No Melanie, it means that there are a divergence of views among some scientists. However, at the risk of repeating myself, the ACMD is made up of leading scientists in this field and their findings and recommendations were clear by a large majority, that Cannabis should remain a Class C drug. According to them, the evidence of a causal link between cannabis and schizophrenia is weak. There is a correlation but this may well be that people who suffer from, or are prone to, mental illness are more likely to self-medicate with cannabis.

A clear causal link has never been shown.

“And just how rigorous is Nutt’s science anyway? For his comparison of the relative risks of alcohol, tobacco and soft drugs is distinctly unscientific.

“Any proper comparison of the risks involved can be made only with similar levels of consumption. But, clearly, the general level of consumption of illegal drugs is very much lower than that of alcohol or tobacco. So Nutt is not comparing like with like.”

Three quick points on this:

Next Phillips tries to make an argument for big differences between legal and illegal drugs:

“No one disputes the immense harm done by alcohol or tobacco. But the crucial point is that the damage done by illegal drugs kicks in at a far lower level of individual consumption.

“If people have a pint of beer or a glass of wine once a week, this hardly causes any health problems.

“But according to Professor Parrott, if people take ecstasy every weekend, this causes low moods, fatigue, disrupted sleep, mid-week depression and other ailments.”

Now it is Ms Phillips who is not comparing like with like. A pint of beer or glass of wine once per week is so low a dose as to have virtually no effect, therefore it is not surprising there would be little or no side effects. One ecstacy pill does have a more potent effect than a pint of beer and carries on that effect for several hours.

A more valid comparison would be to compare someone taking ecstacy every weekend with a typical amount of alcohol drunk by someone of the same age and similar peer group on a typical weekend for them, more likely to be several pints or glasses of wine per night. I suspect over time the side-effects listed by Phillips above would equally apply to the person using alcohol instead of ecstacy.

It is also worth bearing in mind that the person taking ecstacy in the comparison above cannot actually be sure of the potency of the drug they are taking due to its illegality. This is a consequence of the drugs laws that Phillips is so keen to defend. She might wish to reflect on this.

“…the way Nutt assessed the risks posed by all these substances is even more questionable still.

“For he invented his own drug classification system, for which he asked 77 psychiatrists to grade the harm done by a range of illegal drugs as well as alcohol and tobacco.

“Only 29 replied – far too few for a reliable assessment – so he asked other medical experts to give their views. But we don’t know what kind of doctors these were.”

Professor Nutt is the leading scientist in this particular field. The only reasonable way that the findings could be questioned like this is through a systematic review by people qualified to do it.

Towards the end of the article, Phillips now tries to implicitly smear Professor Nutt and the ACMD:

“In the field of drug policy, science has been in part corrupted by the climate of opinion in which the dangers of illegal drugs have been deliberately minimised.

“This is part of a trillion-dollar global campaign to legalise drugs – in which certain pharmaceutical companies have a vested interest, since they stand to make a huge amount of money from the sale of cannabis, ecstasy and other drugs if they were to be legalised.

“With virtually the whole of the drug-related voluntary sector succumbing to the siren song of the legalisers, the whole discourse around drug policy has been changed to ‘harm reduction’, the camouflage for legalisation.”

No evidence is provided for any of the above. She is essentially implying that Professor Nutt and the ACMD has been corrupted to fit in with a legalising agenda. David Nutt is not in favour of legalisation and has never made any statements that I can find that fit in with Phillips’ characterisation. He is just trying to analyse the evidence to the best of his ability and ensure drugs end up in the correct category based on this.

Melanie Phillips also provides no evidence that pharmaceutical companies have been involved in this supposed “corruption”. The paragraph is just tossed in to leave the reader in no doubt as to what they are supposed to think.

The final point she makes is worth looking at too. She claims that harm reduction is a “camouflage” for legalisation. The truth is that many people who have spent years working with drug addicts have come to the conclusion that the best way to reduce harm is to legalise and regulate them. It is not a “camouflage”, it is a genuinely held view about how best to stem the tide of disease and death that continues to occur under the existing legislative regime.

I haven’t quoted everything in Phillips’ article for reasons of brevity (you can follow the link at the top of the article to read for yourself) but there are further examples of her questioning the methodology of Professor Nutt’s work. I reiterate that Melanie Phillips is not a scientist.

28 Responses to “Why Melanie Phillips is Nutts on drugs”