UKIP MEP Mike Nattrass is threatening to take the Sunday Times to court over claims he is being investigated by OLAF, the European anti-fraud police. 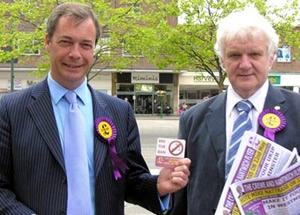 UKIP leadership candidate and West Midlands MEP Mike Nattrass is threatening to sue the Sunday Times over allegations he is being investigated by OLAF, the European Anti-Fraud Office.

Nine days ago, Daniel Foggo, an exert in UKIP sleaze, who first revealed the corrupt activities of convicted fraudster Tom Wise in 2005, and again in 2007, wrote:

“Michael Nattrass, who has represented the West Midlands in the European parliament since 2004, is the subject of an inquiry into whether Denis Brookes, one of his former aides, was paid through public funds while he was working as a regional organiser for UKIP. The EU does not allow taxpayers’ money to be used to pay party officials.”

“It has also emerged that Nattrass was using a business of which he was an equity partner as the ‘paying agent’ for all his assistants’ salaries provided by the EU. Between 2004 and summer this year, all of his assistants’ allowances were channelled through the business account of Nattrass Giles, a chartered surveyors in Birmingham which he founded nearly 30 years ago.

“Nattrass was a signatory to the bank account, although he insisted last night that the administration was handled by another partner in the firm who has since died.”

Nattrass’s threat is revealed by UKIP whistleblower “Junius” on his blog, and is rebutted emphatically. In a letter, Nattrass is reported to have said:

“I am pleased to say there is no truth in the Foggo article. Foggo knows this because we spoke prior to him going to press … but it made no difference … so much for the facts. There is no enquiry into paying agents. So there is no ‘Fraud Enquiry’.”

Nattrass ends his statement by saying:

“It appears the Times want to stop me in the leadership race. I like a challenge like this. But it may be time to go for damages against the Sunday Times…”

“We do not comment on individual cases, we are only the administrators; we investigate, but we can’t prosecute. It is up to national authorities. I cannot tell you that we are not investigating Mr Nattrass.”