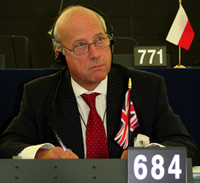 UKIP MEP Godfrey Bloom is refusing to back down from his attack on the BBC in this morning’s Telegraph, in which he said:

“The BBC has blocked sceptics of climate change for four years now, no debate is allowed on the BBC. It is biased reporting and it is censorship.”

“I absolutely stand by what I said. This is one of the most important subjects since the war. The whole thing has been a complete farce and a cover-up. Name me one instance of an informed debate on the subject? I’m not talking about a 30-second soundbite on the news, I’m asking why this hasn’t been investigated by a programme like Panorama.

“Why hasn’t a prominent [climate-denying] scientist been allowed to present a programme like Panorama? Give me one example of this, go on. Are you deliberately misunderstanding the question?”

As Left Foot Forward tried explaining to Mr Bloom, in the past three months alone, the BBC have given platforms to climate sceptics Philip Stott and Ian Plimer on their flagship “Today” programme on Radio Four, and only last week, on Question Time, Melanie Phillips was permitted an uninterrupted two-and-a-half minute rant in which she described climate change as a “scam”.

Also last week, on Monday, the BBC gave plenty of airtime to renowned climate sceptics Lord Lawson and Fred Singer, on the Today programme, the Daily Politics and Newsnight, in long, detailed debates on the hacked emails controversy with Professor Bob Watson, the Government’s chief science adviser – nothing like the mere “30-second soundbites” cited by Mr Bloom.

As with Europe, it would appear UKIP are letting their prejudices get in the way of the facts, beliefs best summed up by former leader Nigel Farage’s view that reducing CO2 emissions would be “foolish”.

“The BBC has a duty to be impartial and balanced in all its reporting and treats climate change stories the same as any other.

“We have produced a wide range of output on the issue of climate change across TV, Radio and Online exploring the issue in depth and hearing from a range of experts including sceptical voices.”