In the week a UN study warned of dire consequences for the planet, predicting a 6-deg. rise in the Earth's temperature, Tory climate-sceptics gather in Europe. 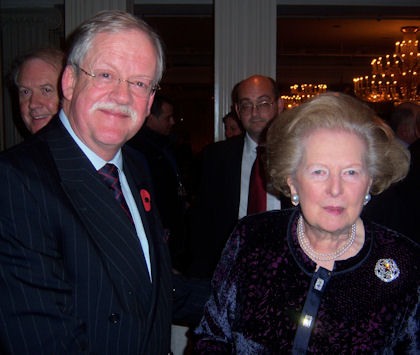 Conservative MEP Roger Helmer is today hosting a “climate sceptics’ conference” in Brussels. The news once again undermines David Cameron’s claims to that the electorate can “Vote Blue, Go Green“.

James Delingpole, wrote yesterday on his Telegraph blog, that:

“Today I’m off on the Eurostar to Brussels (”a carbon neutral journey” it boasts on my ticket – which rather makes me wish I were flying instead) to speak at the European Parliament on Climate Change.

“No, don’t worry. The Goreistas haven’t got to me. It’s a sceptics’ conference – Have Humans Changed Climate? – being staged tomorrow by Tory MEP Roger Helmer. Many of my science and eco-heroes will be there, including Patrick Moore (the co-founder of Greenpeace who subsequently bailed when the charity turned far too red), Prof Fred Singer (who’ll be talking on Can We Trust The IPCC?) and Professor Ross McKitrick (who famously helped expose the notorious Hockey Stick curve).”

Sessions at the conference include “Why can’t we trust IPCC?”, “How the Sun and its solar winds affects our climate” and “Media Bias, Climate Alarmism and the Rise of the New Media.”

“Far too often there is an assumption that everyone is in agreement on the climate change issue; I am pleased to be able to go some way to demonstrating that that is simply not so. I shall keep you posted on the event.”

The climate sceptics conference comes in the same week as the warnings from the UN’s Global Carbon Project study of a six-degree rise in the Earth’s temperature this century, which could lead to a climate not seen for 100 million years, extinctising almost all life and reducing humanity to a few struggling groups living near the poles

This statement will, no doubt, concern David Cameron who said in his conference speech, “The dangers of climate change are stark and very real. If we don’t act now, and act quickly, we could face disaster.”

The conference comes on the back of news this morning that shadow health secretary, Andrew Lansley, has campaigned against a wind farm close to his Cambridgeshire South constituency on the spurious grounds of noise pollution.

“Who are the real Tories? David Cameron may talk green but the Tories either deny climate change is happening or don’t want to deal with it. Cameron lets one of his MEPs get a motley crew of sceptics together while one of his key allies Andrew Lansley says in Not In My Constituency about wind power.

“The world has only a few weeks to get a deal at Copenhagen to tackle Climate change and the Tories are turning their backs on the truth. Here in Beijing the Chinese understand the challenge of climate change and want to tackle it.

“The Tories would leave us left behind not just in Europe on this but across the world.”

Other speakers include Ross McKitrick, a libertarian with a track record of broader anti-environmentalism; Fred Goldberg, an expert in welding technology who claims that polar bears are increasing in number; and Benny Peiser, a social anthropologist who has only published three research papers in peer-reviewed journals, none on human-induced climate change.