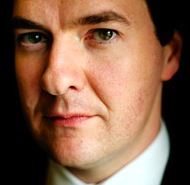 “Someone like George Osborne gets away with leaving out assumptions behind his arguments because he’s not confronted with them. He’s interviewed a lot, but people haven’t really nailed him. There hasn’t been enough debate about the stimulus and national debt.”

To help this process, Left Foot Forward presents a series of questions that interviewers should ask George Osborne on his party’s economic policy:

1) Why did you oppose the nationalisation of Northern Rock and Bradford & Bingley?

In February 2008 during passage of the Banking (Special Provision) Bill, which gave the Government the powers to take Northern Rock into public ownership, George Osborne said, “I am not in favour of nationalisation, full stop” and voted against the second and third reading of the bill. He told the Today programme that the plan was “completely unacceptable.”

He reiterated this position when Bradford and Bingley was being nationalised when he told Sky News in September 2008:

“But in the end what nationalisation means, nationalisation of the mortgages means, is that we are bailing out the very large institutions who took a bet, who lent money to B&B when times were good and made money out of it, and now that times have turned hard and the bets have turned bad, we’re going to step in as taxpayers and bail them out, and I don’t think that’s the right thing to do.”

2) Why did you oppose the fiscal stimulus when every country in the G20 followed this approach?

The respected Brookings Institution carried out an audit of G20 stimulus plans. In March they reported that, “Almost all countries in the G-20 have announced fiscal stimulus measures.”

The following chart, reproduced using Brooking’s data, shows that the UK is mid-placed in relation to both the size of its stimulus and its national debt. 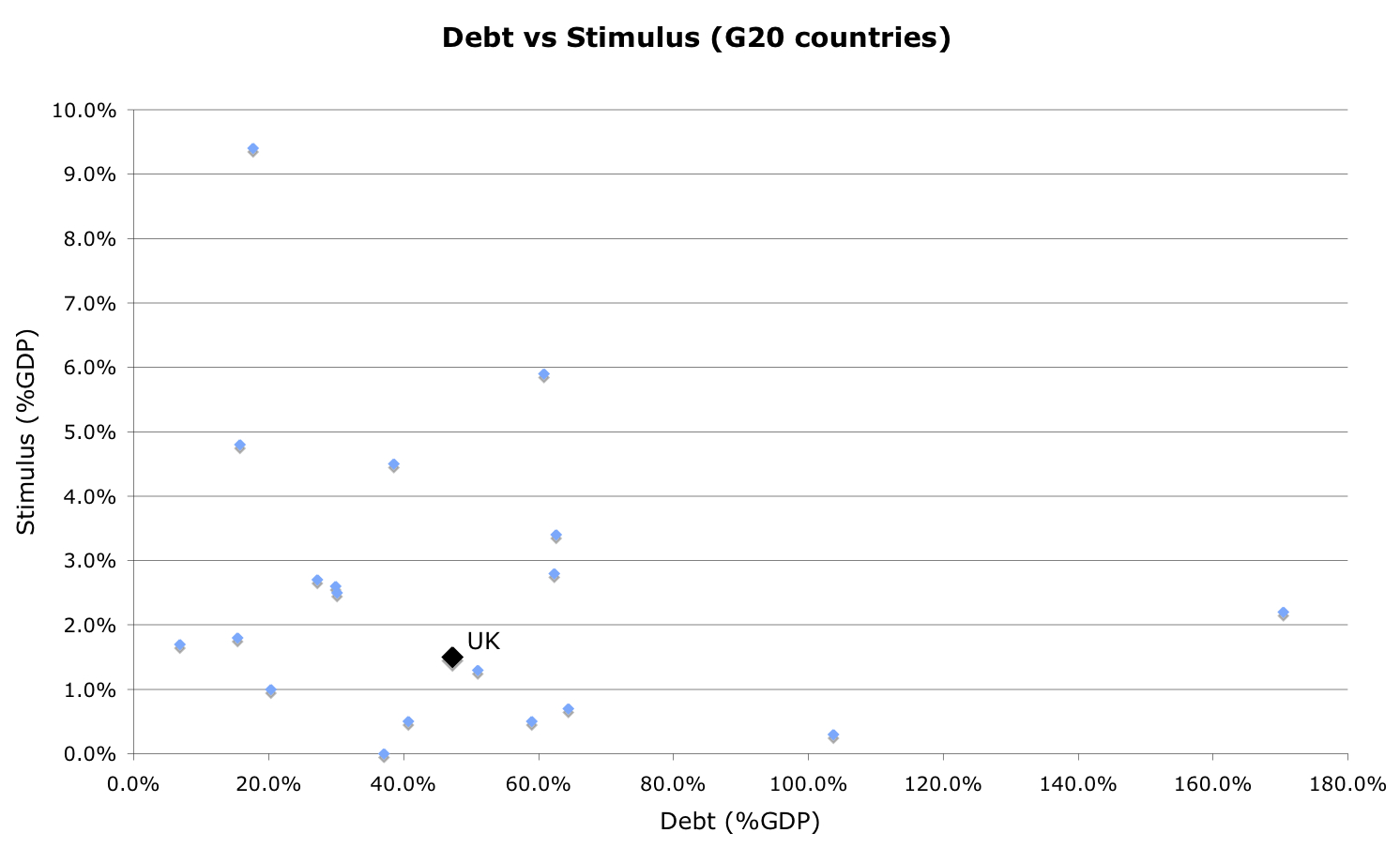 3) Why do you think the most respected economic commentators think your policy to urgently reduce the deficit through spending cuts will be ruinous? Do you know something they don’t?

In October, Martin Wolf wrote in the FT, “What should be done is closely related to when. These sorts of changes must not be rushed. Hasty cuts may lead to bad policies, such as the 60 per cent cut in net investment already decided; and they may also push a fragile economy back into a deep slump … the UK is right to plan for a structural fiscal tightening of at least 8 per cent of GDP. But it is unnecessary – and almost certainly a huge error – to implement such a tightening in short order.”

In September, Anatole Kaletsky wrote in The Times, “To tighten fiscal policy immediately beyond the measures already announced in the last Budget could be a big mistake on the part of the Tories, since the recovery that is now only just starting is unlikely to have developed a self-sustaining momentum by next May or June.”

Also in September, Will Hutton wrote in the Observer, “David Cameron and George Osborne … have decided that the national debt peaking at some 80% of GDP constitutes a national emergency. Never mind that since 1750 the national debt has always been proportionally higher than this, except for two 40-year periods – one at the end of the 19th century and the other from the 1970s until now.”

In July, Sam Brittan wrote in the FT, “But let me explain in my own words why I am more relaxed about debts and deficits than some other commentators. First, there is no regular and predictable business cycle, just an irregular movement of activity into which clever people can read patterns with hindsight … There is now more danger of economic stimuli across the world being reversed too soon than of their being continued too long.

4) Will you desist from describing Britain’s deficit as a ‘debt crisis’ in light of international comparisons showing that Britain’s debt burden is neither large nor unsustainable?

Left Foot Forward has previously shown that OECD figures used in Conservative party publications show that the UK’s debt burden is comparable with other G7 countries and well below that of either Italy or Japan.

Meanwhile, gilt yields are near record lows. Despite Osborne’s fears, the yield from 10-year British Government Securities (gilts) remain low by recent historic standards as this blog has shown. Last month, Martin Wolf wrote, “But with 10-year UK government bond rates at a mere 3.4 per cent, it is perfectly possible that much of the tightening can be delayed until the recovery begins.”

5) Do you still support the policies pursued by the Irish Government over the past two years?

In February 2006, George Osborne told an audience in Dublin that, “Ireland stands as a shining example of the art of the possible in economic policy-making. With its vision of a highly-educated, innovative, open, dynamic, low-tax economy, and relentless focus on the long-term drivers of prosperity, Ireland’s economic miracle has shown that it has the right answers to the challenges of the new global economy.”

As Left Foot Forward has highlighted, pursuing policies recommended by the Conservative party including cutting back public spending has created a depression. Ireland faces a catastrophic triple whammy of 12 per cent GDP decline, 12.4 per cent unemployment, and 5.9 per cent deflation.

6) Why do you continue to talk down the UK’s credit ratings?

In September, Osborne’s deputy Philip Hammond told Newsnight, “We need to send a clear signal to the markets. Two of the credit rating agencies have already warned us that the government’s AAA credit rating will be at risk if the next government does not show greater determination than this government has so far demonstrated.”

The same day, Bloomberg reported that the UK was “unlikely” to lose its top credit rating. And scotching suggestions that a looming Conservative victory was the only thing maintaining the AAA rating, last week Brian Coulton, head of European ratings at Fitch, said, “We are obviously aware that there will be an election next year but our capacity to forecast the election outcome would not be a sufficient basis to maintain a ‘AAA’ rating. We believe that fiscal policy objectives will be reorientated over the course of 2010 regardless of which government is in power.”

7) How do you square attacks on Brown over Sterling’s weakness with your stated desire for ‘export led growth’?

In November 2008, George Osborne broke convention and talked down the currency. He told the Times: “Sterling has devalued rapidly against the euro and the dollar. We are in danger, if the Government is not careful, of having a proper sterling collapse, a run on the pound.”

In September 2009, Osborne told a Spectator audience that, “Our aim must therefore be nothing less than a new British economic model … [including] a more competitive export sector … Both economic theory and international evidence tell us that the policy mix most likely to support a vigorous and sustainable recovery, led by private sector investment and exports, is low interest rates and tight fiscal policy.”

Writing on his FT blog last month, economist Willem Buiter said, “The global economic recovery, led by the emerging markets (other than those in Central and Eastern Europe) and the developing countries will provide a favourable environment for UK exporters, especially given the weakness of sterling.” Put another way, sterling depreciation is increasing the UK’s competitiveness and export volume.

8) Why does the Conservative party continue to mislead voters over poverty and inequality?

At Conservative party conference, David Cameron claimed that Labour made the “poorest poorer” but Channel 4 News FactCheck has given him 4/5 for inaccuracy. More recently Cameron claimed that severe poverty had “actually risen”. But the respected Institute for Fiscal Studies regards this definition of poverty as “unhelpful“.

Meanwhile, academics cited by Cameron, regard his approach to inequality – focusing on the gap between the bottom and middle but not the top – as half-baked.

27 Responses to “The questions that George Osborne must answer”