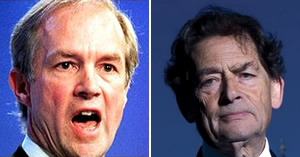 Left Foot Forward can reveal that two Tory grandees who have consistently criticised domestic and international efforts to abate climate change – Lord Nigel Lawson and Peter Lilley MP – have close associations with the oil industry. The duo, with 13 years of Cabinet experience between them under Margaret Thatcher and John Major are on the payroll of companies directly engaged in, or associated with, the lucrative oil and gas industry.

On Monday, Nigel Lawson wrote an article in the Times titled, “Copenhagen will fail and quite right too”. Lawson said:

“The greatest error in the current conventional wisdom is that, if you accept the (present) majority scientific view that most of the modest global warming in the last quarter of the last century — about half a degree centigrade — was caused by man-made carbon emissions, then you must also accept that we have to decarbonise our economies.”

This blog has shown the errors and falsehoods of that article in a point-by-point motivations but Lord Lawson’s true motivations are now becoming clear. The Register of Lords’ Interests details that Lord Lawson chairs and has “significant shareholdings” in the Central Europe Trust (CET). He is described as a “senior advisor to clients on strategy and politics“. CET boast on their website to being, according to a quote in Forbes, “the company to call when you want to do business in Eastern Europe.” Their clients include oil and gas giants Total Fina Elf, Royal Dutch/Shell Group, Texaco, and BP Amaco.

Lawson is also Chairman of the Global Warming Policy Foundation, a group who’s “primary purpose is to help restore balance and trust in the climate debate that is frequently distorted by prejudice and exaggeration.” They are based at 1 Carlton House Terrace SW1Y 5DB and share premises with the Institute of Materials, Minerals and Mining who have a Petroleum and Drilling Engineering Division, which includes two employees of the BP Exploration Operating Company Ltd.

Peter Lilley is a vocal opponent of the UK Climate Change Act 2008 and was one of only five MPs to vote against it. But as the Register of Members Interests claims to show, he is also a paid non-executive director of Tethys Petroleum Limited – a giant oil and gas exploration “focused on Central Asia“. But a look at his profile on the website reveals he’s also the Vice Chairman and – according to his biography – “was a Director of Greenwell Montagu Securities (1986-87) where he headed the oil investment department and which he joined in 1972.” Mr Lilley receives £40,000 “annual retainer” (p.94) from the company.

The Tethys website also states that he was an election observer for the 2005 Kazakhstan presidential elections, which is handy given that Tethys is “proud to be the first non-Kazakh oil and gas company listed on the new RFCA exchange in Almaty”. In 2005, the Times reported that Lilley’s British team were accused of a “Kazakh poll whitewash“:

The Organisation for Security and Cooperation in Europe (OSCE), which sent 460 observers, said that the election did not meet international democratic standards. Flaws included restrictions on campaigning, interference at polling stations, multiple voting, pressure on students to vote, media bias and restrictions on freedom of expression, it said.

“There was harassment, intimidation and detentions of campaign staff and supporters of opposition candidates, including cases of beatings of campaign staff,” said the OSCE mission, led by Bruce George, the British Labour MP.

But Lord Parkinson’s seven-strong team, calling itself a “British parliamentary group”, pre-empted the OSCE report with a much more positive assessment. “The presidential election of 4 December represents a very significant advance,” said the report by his team, which also included Peter Lilley, the former Tory Trade Secretary. “The election was genuinely competitive and voters were given a real choice between candidates. We found no reason to doubt the integrity of the election process.”