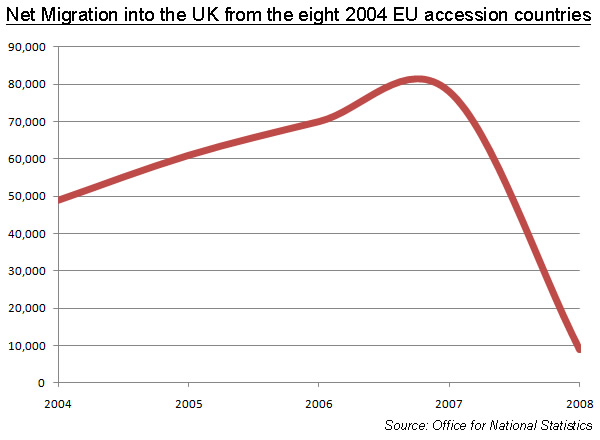 Migrants from Estonia, Czech Republic, Hungary, Latvia, Lithuania, Poland, Slovakia and Slovenia accounted for just five per cent of net migration last year, dealing a blow to the likes of UKIP and MigrationWatch who obsess over the numbers of east Europeans coming to Britain.

The contribution A8 nationals make to the economy is clear: The employment rate amongst working age males born in A8 countries is 91 per cent – the highest of any nationality, the majority of those working in ‘Elementary occupations’ (35 per cent), as ‘Process, plant and machine operatives’ and in ‘Skilled trades occupations’, though they fail to earn as much as UK born workers.

The headline figure from today’s Office For National Statistics release was that emigration hit a “record high” of 427,000, of which 255,000 were non-British, a rise of 86,000 overall.