Nobel prize winning economist Paul Krugman has advocated for a Tobin tax. The Austrian government estimates that the tax could raise £420bn a year. 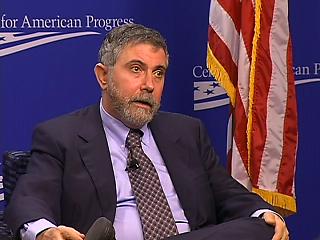 Nobel prize winning economist Paul Krugman has added his name to the list of Tobin tax advocates. The Austrian government estimates that the tax could raise $700bn (£420bn) a year.

“On the claim that financial transactions can’t be taxed: modern trading is a highly centralized affair … while traders are all over the place, a majority of their transactions are settled — i.e., payment is made — at a single London-based institution. This centralization keeps the cost of transactions low, which is what makes the huge volume of wheeling and dealing possible. It also, however, makes these transactions relatively easy to identify and tax.

“What about the claim that a financial transactions tax doesn’t address the real problem? It’s true that a transactions tax wouldn’t have stopped lenders from making bad loans, or gullible investors from buying toxic waste backed by those loans. But bad investments aren’t the whole story of the crisis. What turned those bad investments into catastrophe was the financial system’s excessive reliance on short-term money …

“And a financial transactions tax, by discouraging reliance on ultra-short-run financing, would have made such a run much less likely. So contrary to what the skeptics say, such a tax would have helped prevent the current crisis — and could help us avoid a future replay.”

The US remains a strong sceptic of the proposals so campaigners are urging the rest of the world to go it alone. John Hilary, Executive Director of War on Want, wrote recently:

“Such opposition must not be allowed to block further progress towards the introduction of Tobin-style taxes, especially since it has long been established that such taxes can be applied unilaterally rather than waiting for all states to move together.”

Meanwhile a report published last week by Compass, ‘In Place of Cuts’, urges a domestic financial transaction tax  of 0.1 per cent on all payments in bank accounts. It is estimated that this could generate £4.2 billion.