The reasons behind Labour's win in Glasgow North East, and why they shouldn't mask the electoral mountain facing the party come the General Election next May. 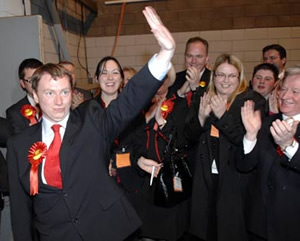 Labour’s Willie Bain has won the Glasgow North East by-election, five months after Michael Martin resigned as Speaker. The result saw Labour record a majority of more than 8,000 over the SNP, securing 59.4 per cent of the vote.

The election saw a record low turnout for any Scottish election of 33.0 per cent in one of the most deprived constituencies in the country; the Conservatives came third, pushing the BNP into fourth place – the far-Right party failing to retain their deposit – with the Liberal Democrats down in sixth.

Despite such a resounding success, however, Mr Bain’s victory hides a number of factors which make it difficult to conclude that Glasgow North East is the start of Labour’s fightback.

First, this is a seat that has returned a Labour MP for the past 74 years, and as such, despite the SNP’s rhetoric that they could take the seat, the result was never really in doubt. Of most importance, however, were Labour’s campaign tactics, which it will not be possible to emulate outside Scotland.

Following Labour’s win in the Glenrothes by election last year, Labour fought Glasgow North East not as a party in Government in Westminster, but a party in opposition to the SNP administration in Holyrood. It is a theme developed extensively by Professor John Curtice on this morning’s Today programme.

As a result, Labour were able to successfully target SNP weaknesses, such as its unpopular decision, reported by Left Foot Forward, to cut the Glasgow Airport link, putting many jobs at risk. It was in effect a campaign, picking up on the theme developed by Labour’s Leader of Glasgow City Council, Steven Purcell, who concluded that the SNP were pursuing “a clear anti-Glasgow agenda”.

The election also came on the back of a number of highly controversial decisions by Alex Salmond’s government, such as Fiona Hyslop’s apparent u-turn on class sizes; and the decision by Justice Secretary Kenny MacAskill to release the Lockerbie bomber Abdelbaset Ali Mohmed Al Megrahi.

Whilst Labour activists and staff have every right to celebrate their success in light of poor opinion polls nationally, it would be premature to extrapolate from this any clear sense of what it means nationally, particularly given the unique political landscape that now exists in Scotland.

For the SNP however, the sheer scale of the result will be a setback to what some conclude is Alex Salmond’s somewhat arrogant attitude. It will have been a particular blow for the nationalists following Salmond’s aim, set just a few weeks ago at his party conference, to get 20 SNP MPs elected at the general election next year.

“People in this community have spoken not just for the constituency but for the whole country – the message for the General Election is clear: Game on. This is a resounding victory for Gordon Brown and Labour. This by-election has been about many things but most of all it has been about jobs and the economy.