UKIP’s MEPs to be investigated by European fraud police after string of expense scandals. 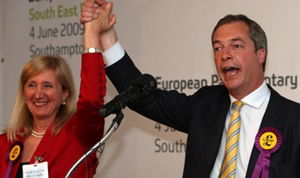 The European Anti-Fraud office (OLAF) is investigating the United Kingdon Independence Party over their MEPs’ serial misuse of expenses. The probe follows the conviction last week of former UKIP MEP Tom Wise, who embezzled more than £30,000 of taxpayers’ money into a secret bank account, buying expensive bottles of wine and a car.

Wise’s deception first came to light in October 2005, when the Sunday Telegraph revealed the £36,000 scam. Three days after OLAF were alerted in the wake of publication, he began repaying £25,530 in an attempt to cover up the fraud. Two years later, in March 2007, the Sunday Times uncovered bank statements showing that Wise “funnelled £39,100 of taxpayers’ money into his own account with the Cooperative Bank – from which he paid [his secretary] Jenkins just £13,555”.

In May 2008, a News of the World undercover investigation revealed that Wise had told a reporter that membership of the European Parliament was an “opportunity to make shedloads of money” and said “yes, I am milking the system”. It was not until the following year, in February 2009, that UKIP finally severed all ties with Wise – four years after the initial allegations. He remained an MEP until June.

In addition to Wise, several other UKIP MEPs have been investigated by OLAF in recent years:

• Nigel Farage, outgoing party leader and MEP for South East England since 1999, investigated over financial matters relating to the Independence and Democracy grouping in the European Parliament, of which he was co-leader – since renamed the Europe of Freedom and Democracy group.

• Derek Clark, MEP for the East Midlands since 2004, investigated for using his allowance to employ Andrew Fear, a UKIP membership officer at the party’s Devon headquarters who does not work for him.

• Jeffrey Titford, MEP for the East of England from 1999-2009, investigated for employing Stephen Allison, a party worker in the north east.Olaf, whose mandate is “to fight fraud, corruption and serious misconduct within the [European] Community” have sent officers to the UK to investigate, where they will work “in close cooperation” with the British authorities. They have the power to collect information, review documents, and carry out on-the-spot checks, inspections and interviews.

Left Foot Forward will continue to monitor UKIP’s activities and update readers on the investigation.

11 Responses to “Euro fraud police turn up heat on UKIP”