Employment rose by 6,000 in the 3 months to September, however there was a 71,000 increase in those out of work for over a year - analysis of the latest stats. 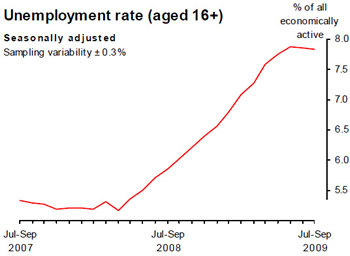 Thankfully my extrapolation of a monthly increase based on October’s stats in my last post (which the stat geeks at ONS and my old colleagues at DWP would have frowned at!) continues to be a trend. So far at least. Digging into the month on month figures reveals that unemployment actually fell by 7,000 between August and September. So could we see the first official fall in UK unemployment since the start of the recession in the December stats?

Considering the economy has shrunk by almost six per cent, these unemployment figures are encouraging. The numbers claiming JSA only rose by 12,000 last month and there is now a good chance that the claimant count will peak well below two million (assuming the economy doesn’t ‘double dip’).

The ONS have some interesting analysis comparing recent recessions, showing that in the early 1980’s unemployment started higher and rose faster, despite that downturn being shallower than today’s. However, there are still millions of families suffering from the human, economic and social consequences of unemployment – and any labour market recovery remains precarious at best. For example, the number of workforce jobs fell by 163,000 in the last quarter (though data on redundancies and vacancies are more positive).

The million-dollar question is why do the unemployment figures appear to be so much less bad than we might expect? The truth is it’s impossible to say for sure. But some of it certainly appears to be linked to the UK’s more flexible labour market (and effective active labour market) policies. For example, there is evidence of significant adjustments in hours and wages. Today’s figures show that the number of people in full-time employment fell by 80,000 while the number in part time employment rose by 86,000.

Incidentally, the gender split of these trends is further evidence that this recession has actually hit the employment of men harder than that of women. Also, earnings growth in the year to September was 1.8 per cent, the lowest rate since the comparable data series began in 2001.

However, there is one massive caveat to the encouraging picture in today’s figures. While the number of people unemployed for under six months fell by 100,000 last quarter, it is much more worrying that there was a 71,000 increase in those out of work for over a year. – these are the people hit hardest by the recession who will face the greatest disadvantages in getting back into work when the recovery beds in.

This is the group the government must prioritise in its fight against unemployment.

The Future Jobs Fund is already proving a success, generating 95,000 jobs for young people who’ve been on JSA for a year. Ministers should use the Pre-Budget Report to extend access to these jobs beyond just the under 25’s, on the way to guaranteeing work to anyone at risk of long term unemployment. This would be a clear demonstration of Labour’s commitment to protecting people from the worst consequences of the recession – and ensuring everyone can have the dignity and purpose of work.