Analysis of President Obama’s forthcoming announcement of up to 30,000 more troops for Afghanistan: the impact on the country, on NATO and on Britain. 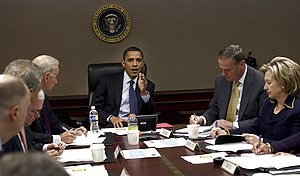 President Barack Obama will announce his plan for Afghanistan in a national address to the US next Tuesday, and it is reported that the plan will include sending as many as 30,000 additional troops to the region.

From the beginning of his now weeks-old consultation process with his diplomatic and military advisors, Mr Obama has made it clear that he was looking for a solution beyond the one requested and recommended by the top US regional commander, Stanley McChrystal, which called for an additional 40,000 US troops and increased focus on population-protection based counterinsurgency.

While the provision of 30,000 or more troops would indicate that Mr Obama has accepted at least a portion of General McChrystal’s plan, the troop total may not be the most important part of the plan – for Afghanistan, and for the US’s NATO allies, including the UK.

Mr Obama has said that he intends to “finish the job” in Afghanistan, which implies that he has an end-state in mind for this conflict. It is possible that this, in itself, constitutes a major change for the NATO mission there; it is not entirely clear what realistic goal the previous US Administration was working toward.

‘Realistic’ is the key word, as a functional, Western-style Afghan democracy appears an increasingly quixotic dream with the unpopularity of the Karzai Administration, widely seen as corrupt and illegitimate – the UK and other NATO stakeholders should be looking for a viable end-state in Mr Obama’s plan. The essential question is what will take the place of NATO troops as their role dwindles.

There are two approaches to this: reforming the central government, or decentralising authority in Afghanistan.

The Karzai government has not demonstrated its fitness as a partner for NATO, but it may be that Western powers have unwittingly created a moral hazard for Mr Karzai by so strongly emphasising the importance of Afghanistan that he has come to expect Western support and protection in perpetuity.

It seems desperately unlikely that Mr Karzai’s government (or, indeed, Mr Kazai himself) would survive a complete withdrawal of Western troops in the near-term; it might be possible to push through a reform of the current government under threat of leaving it to fend for itself.

The drawback of this plan is that it could involve a bout of brinkmanship with Mr Karzai and his allies, who would likely resist reform until NATO troops were actually getting on the planes to leave. For that to be successful, NATO, and in particular Mr Obama, would need to have an alternative to the Karzai government, and be clear that it is a course they are prepared to follow in the event of recalcitrance in Kabul.

Decentralising authority, either as a plan for the near-term or as a long-term alternative to Mr Karzai, has the appeal of agreeing with the Afghan traditions of government that existed before NATO arrived. Institutions of power in Afghanistan have traditionally been quite small, and there is a real question about whether a federal Afghan government can function at all.

Devolving authority for infrastructure-building and order to regional (or smaller) authorities would be less efficient than working with a functional Afghan state, but might be more realistic and long-lasting. NATO would likely have a longer-term role in this scenario.

Mr Obama’s plan, whether it gets into such scenarios or not, must include a vision for Afghanistan in ten years that does not feature a functional Afghan state under an unreformed central government, for that is simply unrealistic, and its presence in the plan would be a cause for concern.

The UK and other NATO players in the region should look for any emphasis on unifying the military and civilian-aid missions, as well as increasing transparency in both efforts, and a clarification of the relationship between counterinsurgency and infrastructure-building in Afghanistan and counterterrorism in Pakistan.

As for what the plan should not offer, it is the one thing every stakeholder would like: a defined timeline for withdrawal. There are still too many variables at stake, chief among them the question of whether the Karzai government will reform or must be sidestepped or jettisoned.

For now, it will have to be enough to know what the conditions for withdrawal will look like and what steps must be taken to get there.