A 2003 report by Ken Clarke argued that a Supremacy Act, similar to the UK Sovereignty Act proposed today, would be "fundamentally incompatible" with EU membership. 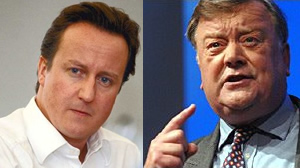 A 2003 report by Ken Clarke argued that a Supremacy Act, similar to the UK Sovereignty Act proposed today by David Cameron, would be “fundamentally incompatible” with EU membership and a “recipe for anarchy”.

The report (no longer on the Internet but available for download here), published by the Tory Europe Network, argued that:

“Throughout our eighteen years in Government, we always accepted that the European Union could not possibly work without its law taking priority over national laws within its own competence. There has never been any serious doubt that for us to purport to reverse this principle by an Act of Parliament would be fundamentally incompatible with our continued membership of the Union, and would be taken as an immediate signal of our withdrawal from full membership.

“Ideas such as a ‘supremacy act’ asserting the superiority of British law or giving the British courts the power to overrule judgements of the European Court of Justice undermine one of the fundamentals of the European Union – the universal application of EU law which actually needs to be strengthened in some areas to ensure that every State obeys the rules.

“Without a universally applicable and enforceable body of European law, the European single market simply could not function as it does. British businesses can treat the other [members] – as part of their ‘home market’ safe in the knowledge that common standards and rules apply. And of course an attempt to end the supremacy of EU law in areas where it does not suit us implies that we would be happy to see other EU countries do the same. But this would mean that areas where even anti-Europeans agree that common legal standards benefit us could also be under threat. It is a recipe for anarchy.”

“So as well as making sure that further power cannot be handed to the EU without a referendum, we will also introduce a new law, in the form of a United Kingdom Sovereignty Bill, to make it clear that ultimate authority stays in this country, in our Parliament.”

A spokesman for Ken Clarke told Left Foot Forward, “The United Kingdom Sovereignty Bill promised today by David Cameron does not do any of the things that Ken Clarke was criticising in his 2003 paper. As David has made clear, the Bill would not mean striking down individual items of EU legislation but would provide ultimate constitutional safeguards against any attempts by EU judges to erode our sovereignty. Ken fully supports this and the series of measures announced today for which the Conservative Party will seek a mandate at the next general election. “