The data used by the University of East Anglia’s Climatic Research unit is perfectly valid. Do not listen to a word the deniers have to say. 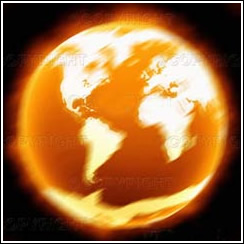 The anti-scientific side of the blogosphere, and increasingly the mainstream media, is alight with what David Cameron’s old University friend James Delingpole hysterically asserts via his Daily Telegraph column could be the ‘final nail in the coffin of anthropogenic climate change’.

What Delingpole, together with the blowhards and headbangers on the US right are calling ‘climategate’, revolves around emails from the University of East Anglia’s Climate Research Unit (CRU) which were hacked and posted on the internet on Friday.

These climate deniers seem to think the CRU, like the Royal Society, NASA and the US National Academy of Sciences, are agents of a clandestine global movement against the truth. By Saturday morning this story had already resulted in over 600 blog posts and around 200 mainstream press mentions.

For the best reaction to this hyped up story making its way around the right wing echo chamber – see Realclimate’s reaction. (This is a website run by some of the world’s pre-eminent climate scientists.) Their team of peer-reviewed climate experts conclude:

“The timing of this particular episode is probably not coincidental. But if cherry-picked out-of-context phrases from stolen personal emails is the only response to the weight of the scientific evidence for the human influence on climate change, then there probably isn’t much to it.”

Professor Bob Watson – a chief science adviser to the government and former IPCC author – told the Today Programme this morning:

“These scientists at the University of East Anglia are both honourable and world class, their data is not being manipulated in any bad way whatsoever and it is totally consistent with two independent data sets in the United States, one at NASA, and one at NOAA, the National Oceanographic and Atmospheric Administration and so I think while some of the wording in those emails is inappropriate and should have been more careful, these scientists are not manipulating or hiding anything. There’s absolutely no doubt the world’s climate is changing, and this data set, along with other data sets, proves that beyond doubt.”

This is also an amusing must read reaction that provides some perspective.

Today Professor Phil Jones, the director of the CRU, whose emails are at the centre of the story, said he wanted to put the record straight, saying he saw the hack “caused a great deal of ill-informed comment”, and Kevin Trenberth, another leading climate change scientist whose private emails were also among those stolen, said the leaks may have been aimed at undermining next month’s global climate summit in Denmark.

“It is right before the Copenhagen debate, I’m sure that is not a coincidence.”

Left Foot Forward’s Rupert Read has a follow-up on the story here.