David Cameron's use of poverty statistics are at odds with the findings of the Institute for Fiscal Studies. Particular on measures of severe poverty.

David Cameron’s use of ‘severe’ poverty statistics in his speech last night are at odds with the findings of the Institute for Fiscal Studies.

“In the past decade, the gap between the richest and the poorest got wider. Indeed, inequality is now at a record high. The very poorest in our society got poorer – and there are more of them.  The incomes of the bottom ten percent actually fell by £6 per week between 2002 and 2008 before housing costs, and £9 per week after housing costs.  The number of people living in severe poverty has actually risen – not fallen, risen – by 900,000 in the past ten years.”

But two IFS reports undermine his use of statistics. In May, the IFS published ‘Poverty and Inequality in the UK: 2009‘. It contained the following passage:

At first glance, this would seem to indicate that ‘severe’ poverty really is ‘severe’. However, other work has suggested that people in this group have, on average, living standards equivalent to those with much higher incomes (where living standards are measured by expenditure/consumption and/or material deprivation) … we believe that it is unhelpful to refer to those with incomes less than 40% of the contemporary median as living in ‘severe’ or ‘deep’ poverty.” (p.34)

In a separate report on ‘The living standards of families with children reporting low incomes’ published in the same month, IFS write that:

“This report confirms other findings that, without taking account of any other factors, children from households with the lowest incomes do not have the lowest average living standards …

“To be precise, the roughly one per cent of children living in households with incomes below £50 a week have average living standards comparable to those with incomes of £250 to £500 a week.” (p.3)

The graph below produced by the IFS shows that the Gini coefficient, a more respected measure of inequality, rose dramatically in the 1980s, more moderately in the 1990s before falling in Labour’s second term. It has risen in Labour’s third term. In their assessment of poverty and inequality, the IFS note that, “Although the UK’s income inequality was higher than the OECD average in the mid- 2000s, the UK was somewhat unusual among OECD nations in having falling income inequality between the mid-1990s and mid-2000s.” 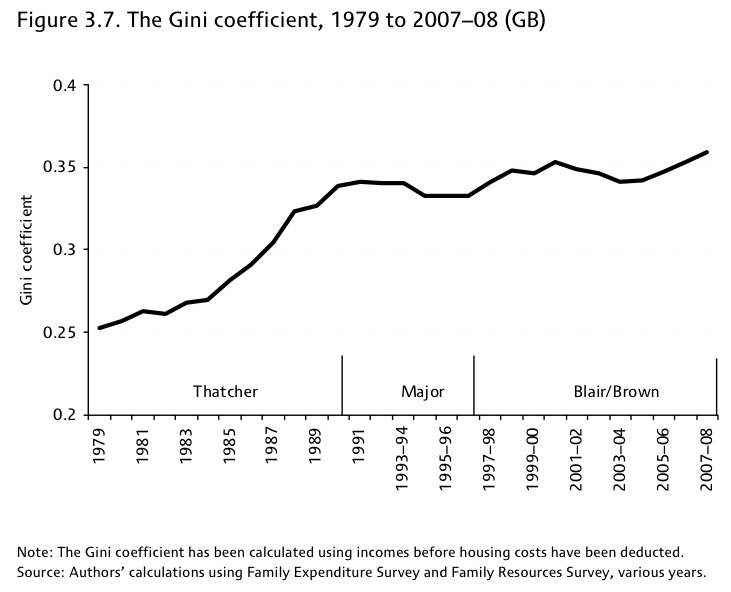 Yesterday Kate Green, chair of of the Campaign to End Child Poverty, said:

“We welcome the fact that Conservatives are taking seriously the scandal of four million children in poverty in the fourth richest country in the world. But their proposals miss the point that without real income redistribution to close the inequality gap we will never reach that goal.”

Green had previously written for Left Foot Forward on the need for around £4 billion of additional expenditure in the Pre-Budget Report in order for the Government to meet its commitment to halve child poverty by 2010. David Cameron did not mention this policy last night.