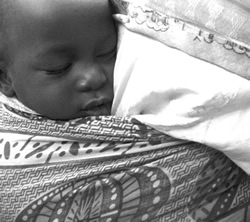 In the midst of a global recession, it is perhaps inevitable that politics becomes more inward looking. But when a failure of political will is contributing to the unnecessary deaths of more than six million children a year around the world, now is the time to act.

Twenty years on from the UN Convention on the Rights of the Child, we are confronted by what is arguably the biggest rights violation of our age: nearly nine million children dying each year before their fifth birthday in the world’s poorest countries; the overwhelming majority from preventable conditions such as pneumonia, diarrhoea and neonatal complications.

At least two-thirds of these lives could be saved if governments made child health a priority and rebalanced spending between prevention in the community, and curative treatment. At the moment, health spending often fails to reach those most in need: over 250 million children live in a health care desert, where they have no real access to effective services.

These children, their families and communities need simple life savers at the local level – items such as mosquito nets, nutritional supplements and safe, clean drinking water, if we are going to prevent children dying from conditions like diarrhoea and malaria.

At the moment, health efforts tend to sideline these investments. Malnutrition is a case in point: it plays a role in over one-third of child deaths, but only 1.5 per cent of aid for health is directed towards nutrition. National governments tend to focus on big ticket items like hospitals in capital cities and donor agencies tend to focus on single diseases or on a narrow approach to ‘health systems strengthening’ that puts little emphasis on low cost, proven measures like skilled birth attendance or basic maternal care.

We know from countries like Malawi that dramatic progress can be made by spending intelligently in these areas. Despite being one of the poorest countries in the world, it has halved child deaths from 20 per cent to 10 per cent since 1990 by investing in prevention – by contrast, Kenya has gone backwards over the same period. It has spent more on health care per head than most African countries – over $100 a year – but it has not spent it in the right places.

Countries like Malawi cannot tackle the challenge single-handed. Donor countries like the UK need both to increase and refocus their own spending. By 2015 aid for health needs to triple from the current level of $16 billion a year to achieve the international goal of cutting child deaths by two thirds. To put it in perspective, this is equivalent to five days’ health spending in the US, or 4 per cent of the fiscal stimulus announced by the G20 this year.

For its part, the UK government has said that it will allocate £6 billion over seven years to supporting health in the poorest countries. A clear plan is needed for where and how this aid will be spent, to ensure that it makes the maximum possible contribution to achieving the goal of ending preventable child deaths.

This can only happen if the UK government, and governments around the world, feel public pressure to act. You can do your bit. Please help us by spreading the word, blogging about this, signing our petition and sending your MP a Christmas card, so that together we can achieve Child Health Now.

Patrick Watt is head of public affairs and campaigns with World Vision UK. He has previously worked with ActionAid, Oxfam and the World Bank on aid and education, and has written on African development and the Millennium Development Goals.

2 Responses to “Act now to prevent millions of child deaths”