UKIP leader Nigel Farage claims he is "absolutely ruthless" when dealing with sleaze - despite it taking him four years to dismiss convicted fraudster Tom Wise. 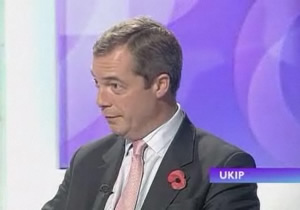 UKIP leader Nigel Farage has claimed his party is “absolutely ruthless” in dealing with sleaze – despite it taking them four years to get rid of jail-bound fraudster Tom Wise.

“When he came to Brussels in 2004, I put a code down, that I asked them all to obey by. He refused to do so. He then, when he was found out, lied to me, and for that reason I took the whip away from him.

“You know, in every party, in every company, there are bad apples, the question is how do you deal with them, and in UKIP we’ve been absolutely ruthless.”

However, Farage’s actions, as Left Foot Forward highlighted on Tuesday, appear to have been less than ruthless. Wise, who was sentenced to two years’ jail yesterday, first came to the attention of the authorities in 2005; he remained a member of UKIP until earlier this year.

Farage, who is standing down as leader, also derided all but one of the candidates vying to succeed him – including three of his colleagues in Brussels – West Midlands MEPs Mike Nattrass and Nikki Sinclaire and London MEP Gerard Batten.

“There are five candidates standing for leader of UKIP, only one of them is a serious and credible candidate, and that’s Lord Pearson, who has had major achievements in his life in business and in politics too. If Lord Pearson gets that job, and I’m still around leading our party in the European Parliament, I would argue UKIP is stronger and would be for several years to come.

“If it’s not Lord Pearson, things will be tricky, yes, but I think it will be Lord Pearson. I think he is so head and shoulders above all the other candidates.”