Godfrey Bloom MEP (UKIP, Yorkshire & North Lincolnshire) today defended the use of the term “Paki” and called on those offended by the term to “lighten up.” 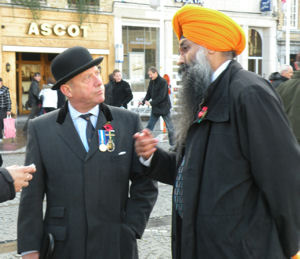 Godfrey Bloom MEP (UKIP, Yorkshire & North Lincolnshire) today defended the use of the term “Paki” and called on those offended by the term to “lighten up.”

While discussing the fallout of Anton Du Beke’s use of the offensive term on the Jeremy Vine show on BBC Radio Two – presented today by Richard Bacon – Bloom refused to acknowledge the word’s racist connotation and likened it to referring to someone from Birmingham as a “Brummie.” Bloom even went so far as admitting to using the racial slur.

Richard Bacon: “Godfrey, do you or have you used the word ‘Paki’?”

“If you come from Pakistan, it’s shortened for Paki in the same way that we’re called Brits, Poms, or whatever…”

Yasmin Alibhai-Brown: “You can always say Pakistan. Paki is a word of abuse. It’s not funny.”

Anton Du Beke referred to his dancing partner, Laila Rouass, as a “Paki.” Rouass is of Indian and Moroccan descent. Strictly Come Dancing presenter Bruce Forsyth was drawn into the row saying that people should “get a sense of humour.”

Forsyth has since clarified his remarks saying,

“To be absolutely clear, the use of racially offensive language is never either funny or acceptable.”

Listen to Bacon’s interview with Bloom and Ms Alibhai-Brown below and download it here: