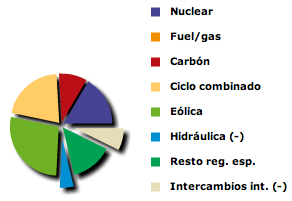 It’s a popular myth that renewables just cannot deliver that much power.

London Mayor Boris Johnson has joked about “crucifying our landscape with wind farms which, even when they are in motion, would barely pull the skin off a rice pudding.” When he was Energy Minister John Hutton told Labour Conference in 2008, “No coal and no nuclear equals no lights, no power, no future.”

The conventional wisdom in Westminster is that renewable technologies are tomorrow’s not today’s technologies – that they’re a good idea in principle but just cannot deliver that much energy. This is a point reiterated by energy bosses, like Tony Hayward of BP who has called renewables “a valuable option for the future.”

On Friday, for the first time ever, there was a moment when a nearly half of Spain’s electricity came from renewable sources. This graph shows how Spain generated a whopping 45.9 per cent of all its electricity from renewable sources: eolica (wind), hidraulica (hydropower), and resto reg. esp. (biomass and solar). CO2 emissions dropped accordingly.

With such a big green energy section, no wonder that by 2006, according to Deutsche Bank, the Spanish were already employing 35,000 in their wind sector and 35,591 jobs in their solar sector. Meanwhile, Germany already produces more than 15 per cent of its electricity from renewable sources, and aims to raise this to 30 per cent by 2020 and 45 per cent by 2030.

Despite having greater renewable resource potential than Spain, the UK currently generates just 5.5 per cent of its electricity from renewable sources. (Renewable Energy Strategy, DECC, Page 10.)

18 Responses to “Spain generates half electricity from renewables”