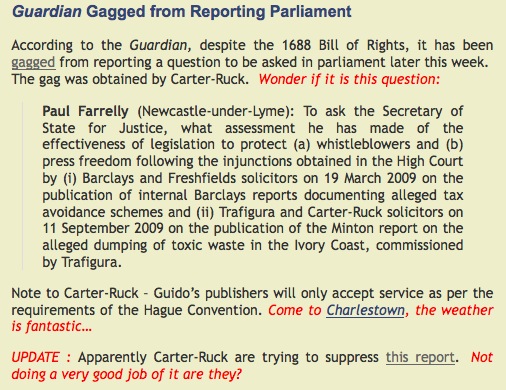 The blogosphere’s growing influence and power became clear this morning with several blogs publishing in full a parliamentary question from Paul Farrelly MP which The Guardian has allegedly been gagged by Carter-Ruck from publishing. The Guardian say,

“The only fact the Guardian can report is that the case involves the London solicitors Carter-Ruck, who specialise in suing the media for clients, who include individuals or global corporations.”

But Richard Wilson first published a related parliamentary question in full while Guido Fawkes did the same and provided a link to the Minton report containing evidence of Trafigura’s practices that has also allegedly been suppressed. Meanwhile Political Scrapbook quotes evidence given by Mark Stephens of Finer Stephens Innocent LLP to Paul Farrelly at a Culture, Media and Sport Select Committee about the activities of Trafigura.

Next Left provides the context:

“I was rather impressed by some more extensive reporting which the same David Leigh of the Guardian undertook over the oil company Trafigura‘s shocking oil spillage in the Ivory Coast, over which the company was widely report to have recently decided to offer a £30 million settlement to 31,000 people affected. I recall that it was an interesting story because of the way the newspaper worked closely with Newsnight on some excellent investigative digging.”

While Ministry of Truth goes into more depth on the findings of the Minton report, which “reveals a number of toxic dumping incidents.”

The Spectator have become the first mainstream media outlet to publish the question. 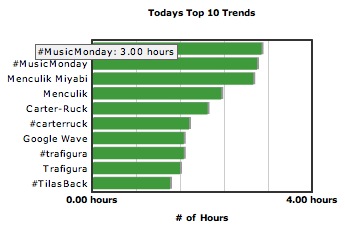 According to tweetstats.com, five of the ten top trends today are related to the Guardian gag: Guardian, Carter-Ruck, #carterruck, #trafigura, Trafigura.

Fantastic updates by Paul Canning at the Online Journalism Blog

Paul Farrelly has forward to Left Foot Forward his comments on today’s events. Some of these remarks have already been quoted by the Guardian but are repeated in full here:

“The issuing by the courts of so-called ‘super-injunctions’ is rightly controversial and a matter of growing concern. That is why, using parliamentary privilege, I tabled these questions to Jack Straw at the Ministry of Justice as a matter of urgency.

“The practice offends the time-honoured ‘rule against prior restraint’, which safeguards freedom of expression in this country. It also fails to protect whistleblowers, acting in the public interest. The huge legal bills involved in fighting cases, too, have a chilling effect on legitimate investigative journalism.

“So often the beneficiaries are big corporations. The fact that the press is also barred from reporting the existence of these gagging orders is doubly pernicious. It is a subject the Select Committee will be addressing in our current enquiry into the press and the way the law works in Britain today.

“Following The Guardian’s front page story today, I telephoned the newspaper to ask whether the MP they referred to – and felt constrained in reporting – was me. The chain of events, I understand, was that The Guardian wrote to Trafigura’s solicitors Carter-Ruck yesterday alerting them to its intention to report my questions.

“Carter-Ruck then responded in writing warning of further legal action, if they did so. Absolute privilege in reporting parliament has been established since the Bill of Rights in 1688. It is a fundamental freedom for the press and it is vital that neither lawyers nor the courts seek to attack this time-honoured right. That is why I immediately contacted the Speaker’s office today and raised the issue as a point of order in the House this afternoon.”