Another day, another gaffe from everyone’s least-favourite rent-a-quote. We are amused! 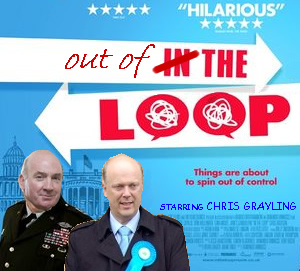 Chris Grayling’s week looks like going from bad to worse with the revelation the Scottish Conservatives oppose the kind of minimum pricing plan for alcohol unveiled by the Shadow Home Secretary on Wednesday.

Following his denunciation and sudden about turn over the appointment of General Dannatt to the Tory defence team and his revisionism over comparisons of Moss Side to “The Wire”, which Left Foot Forward took him to task on earlier this week – he now appears to have been completely unaware of his party’s health policy in Scotland.

In his conference speech he said:

“Let me tell you how we’re going to tackle binge drinking and anti-social behaviour. We’ll start with the problem of 14-year-olds hanging around with bottles of super-strength beers or ciders. It’s much too easy for them to get very drunk quickly and cheaply.

Shadow Cabinet Secretary for Health & Wellbeing in the Scottish Parliament Mary Scanlon, however, does not believe “blanket minimum pricing” is the solution to binge drinking.

“More needs to be done to understand why people drink to excess. The recent Audit Scotland report found that three out of four people with a drink addiction have an underlying mental health problem.

“It is important that the Scottish Government stops relying on blanket minimum pricing as a single tool solution. Alcohol addiction and drink binging is a complex problem, requiring a coordinated response.”

4 Responses to “Gray days for Grayling”