Detailed look at Mr Cameron’s “Get Britain Working” plans, which include proposals to get people off Incapacity Benefit and on to Jobseeker’s Allowance. 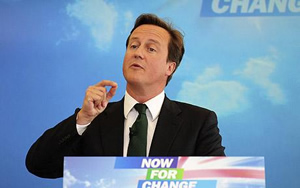 David Cameron has kicked off the Conservative party conference with a call to Get Britain Working. He will be happy with today’s headlines, which give the sense that the Conservatives have determination and fresh ideas to tackle unemployment. But welfare policy is notoriously complex and opaque, so it can be hard to work out what is actually new and if any of it is any good.

The first thing that stands out is the irony of Mr Cameron’s claim that the Conservatives are the party of jobs. They oppose the fiscal stimulus that is funding £5 billion of extra back to work support for the higher numbers unemployed now and which is also maintaining demand in the economy during the downturn to contain job losses. So this is jam tomorrow when people need help today – while the Tories repeat their mistakes from previous recessions.

Looking at the substance, there is a lot that the government is already doing. It has an ambitious plan to reassess everyone claiming Incapacity Benefit over the next three years. Are the Tories saying they could do this at a quicker rate than 10,000 a week? Similarly, the so-called AME-DEL (or ‘invest to save’) funding model is being trialled from next year at a rate that David Freud himself said was “happening quite fast” and was “going to take five to six years”.

It would be interesting to know why he now thinks this could all be done quicker, especially when the financial markets are now much less favourable to the kind of long term financing that providers will need to make this work than when he wrote his report for government.

Less than a year out from the election, the Tories are keen to suggest that their plans are fully funded. The £600m upfront costs they say is needed apparently comes from assuming that half a million current IB claimants will fail the medical assessment and go onto the (lower rate) Jobseekers Allowance. Maybe, maybe not.

They also claim that earlier back to work support, from six months unemployed, will be funded through the ‘AME-DEL’ model. But the reason this works for the long term unemployed is that, without support, they are likely to remain out of work and so impose a financial cost on the state in benefits paid out and taxes not paid in (around £8,000 a year).

But this simply does not hold when you consider that 60 per cent of people who have been unemployed for six months get a job during the following six months (even in a recession) with relatively low cost support from JobcentrePlus. So either outcome payments for providers would have to be significantly lower (potentially to the point of being unsustainable) or the state would have to pay over the odds.

The truth is that helping people back to work costs money – which the Tories cannot find because they are putting debt reduction ahead of every other objective. It also requires positive action to ensure the chance of work is real. That is the principle behind Labour’s pledge to guarantee a job or training to every young person at risk of long-term unemployment.

It is also why the government is doubling the budget of Access to Work, which pays for workplace adjustments that enable disabled people to take jobs. And it is the driving force behind the minimum wage and the Working Tax Credit, which tops up the wages of the low paid. Mr Cameron does not seem to have anything to saying about any of this. The Tories have picked the right issue to focus on at their conference, but their spending straightjacket means they cannot come up with a positive solution.