In his article in yesterday's Daily Mail, Francis Wheen claims that our society is the fulfillment of 1970s paranoia. He also has a book out, called "Strange Days Indeed: The Golden Age of Paranoia." But Wheen does our age a disservice in turning his theory of the 1970s into a theory of now. 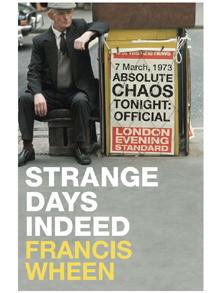 In his article in yesterday’s Daily Mail, Francis Wheen claims that our society is the fulfillment of 1970s paranoia. He also has a book out, called “Strange Days Indeed: The Golden Age of Paranoia.”

Wheen’s first premise is that “the defining characteristics of the Seventies were economic disaster, terrorist threats, corruption in high places, prophecies of ecological doom and fear of the surveillance state’s suffocating embrace.“ The second is that we are living in the fulfillment of that prophecy. His segue from one to the other is a comment by George Osborne in January last year after the nationalisation of Northern Rock in which the Shadow Chancellor said, “Life in Brown’s Britain is like an episode of Life On Mars” referring to the BBC TV hit drama of 2006 in which a policeman has an accident and wakes up in 1973.

Osborne’s comment is followed by further proof of his theory. It comes in the form of another BBC television programme, this year’s remake of Reggie Perrin, with Martin Clunes in the role formerly taken by Leonard Rossiter. Wheen proceeds through various instances of seventies paranoia: Watergate, Gravity’s Rainbow, and Peter Wright – the former MI5 counter-intelligence officer who believed that Harold Wilson was a KGB agent – all get a look in. It is an interesting portrait of a decade but Wheen does our age a disservice in turning his theory of the 1970s into a theory of now, feeding our residual paranoias to get his book airtime in the Daily Mail.

A year after the collapse of Lehman Brothers, as Paul Krugman has suggested, it would appear to be the 1980s and its great deregulation of financial markets, not the 1970s, whose seeds have come to fruition. But Wheen is right, television right now does suggest otherwise.