Today's ICM poll for the Guardian appears to show that the public are open to tax rises as well as public spending cuts. The findings appear to undermine a Sunday Times report from September 13th that, "Voters are overwhelmingly in favour of cutting public spending rather than tax rises to close the budget black hole." 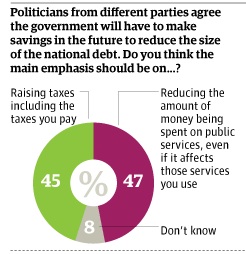 Beyond the headlines, today’s ICM poll for the Guardian appears to show that the public are open to tax rises as well as public spending cuts. The Guardian reports that:

“Today’s poll also shows the public are split about the best response to the budget deficit. Asked whether they would rather pay more tax, or see cuts in services, including ones they use, 45% pick tax and 47% service cuts.”

Left Foot Forward will update later when we have the underlying data.

“The differences in the two questions is crucial. ICM talks about ‘the services you use.’ Ours doesn’t. We have found in the past that most people think public spending can be cut significantly without harming the quality of front-line services. Both main parties claim that they intend to achieve this.

“The ICM question assumes that this endeavour will fail, and that front-line services will be hurt. They might be right, and they might be wrong. Taking the two polls together, we can make the following predictions:

5 Responses to “Public split on tax rises vs. spending cuts”