Tory peer Lord Ashcroft, whose tax affairs have been the subject of concern for the past decade, is the new owner of PolitcsHome and ConservativeHome. 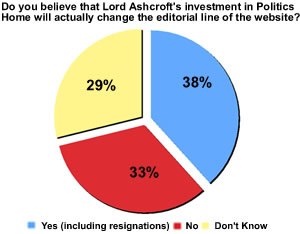 At least 20 people have resigned from PoliticsHome following the takeover of the website by controversial Tory peer Lord Ashcroft in a £1.3 million deal which included the purchase of ConservativeHome.

A poll of PoliticsHome’s own Phi100 panel carried out in the wake of the sell off found 42 per cent thought Lord Ashcroft’s investment would not affect the editorial line. But methodological doubts were cast by Sunder Katwala on Next Left. Inclusion of those who have resigned painted a different picture, as shown by the chart on the right, with only one-in-three expressing confidence in the site’s impartiality.

The sustainability of the Phi100 poll appeared to be in doubt last night as the panel has not been updated since Wednesday lunchtime. Regular readers have become used to 3-4 new polls per day.

The most high-profile board member to leave is PoliticsHome’s editor-in-chief Andrew Rawnsley, associate editor of The Observer.

“It was essential for users of the site that they could feel absolute confidence in the political independence of PoliticsHome. I do not believe that can be compatible with being under the ownership of the deputy chairman of the Conservative party.”

Right-wing commentators, however, are supportive of the move. Tim Montgomerie, editor of ConservativeHome, said:

“Lord Ashcroft has given firm assurances that he will never interfere with our editorial judgments. I’m confident in those assurances. And let me be absolutely clear: If he were ever to instruct me to change an editorial line, I would resign without hesitation. I do not expect to need to.”

Montgomerie announced this morning that ConservativeHome was looking for applicants for a “new creative team.” The Labour-leaning blog Political Scrapbook first reported on Wednesday that Ashcroft had, “hired a staff of four video-only creatives to produce hard hitting American-style attack videos.”

“What a pity it is that a handful of left of centre politicians and commentators have taken their bat and ball home from PoliticsHome. As others have said, wouldn’t it have been better to at least give the site the benefit of doubt and see how it panned out? After all, the site contains no comment, merely news aggregation.”

Lord Ashcroft – whose office at Conservative Party HQ is larger than even David Cameron’s – has long been the subject of speculation over his tax affairs. Only last month the Independent reported on renewed demands by MPs for the publication of secret details of his promise to live permanently in the UK. He has also been criticised by the Prime Minister of Belize for attempting to “subjugate an entire nation” with his money.

6 Responses to “PoliticsHome’s impartiality in doubt”