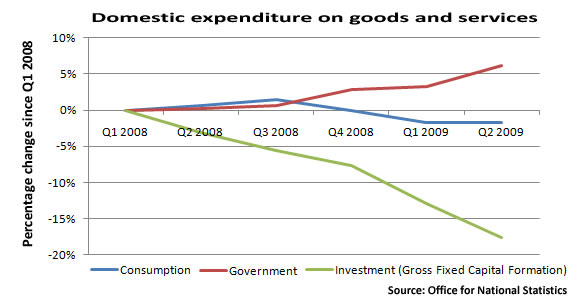 David Cameron and George Osborne  argue that the national debt is the biggest threat to Britain’s prosperity. By focusing on government spending they are ignoring the implications of the fall in investment. The ONS reported today that:

In the short run the large fall in investment across the economy has been a major driver of the current recession. As ONS figures (Table C1) show:

Not only is the fall in investment the driver of the current recession, it also poses a threat to the UK’s longer term economic health. Research by Harvard Professor Dale Jorgenson has shown that the level of investment is the single largest determinant of long run economic growth.

“Exploiting the new data and methodology , I have been able to show that investment in tangible assets is the most important source of economic growth in the G7 nations. The contribution of capital input exceeds that of total factor productivity for all countries for all periods. The relative importance of total factor productivity growth is far less than suggested by the traditional methodology of Kuznets (1971) and Solow (1970), which is now obsolete.”

Given that the fall in investment is both the driver of the current recession and likely to impact the UK’s longer term growth, the public would be better served by a serious discussion of how politicians intend to reverse the slide rather than the constant hand wringing over the national debt.

6 Responses to “Collapse of investment (not debt) is greatest threat”