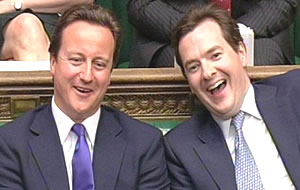 In an article for tomorrow’s relaunched New Statesman, David Blanchflower, professor of economics at Dartmouth College in the United States, and former independent member of the Bank of England’s monetary policy committee, will write:

“If spending cuts are made too early and the monetary and fiscal stimuli are withdrawn, unemployment could easily reach four million.

If large numbers of public sector workers, perhaps as many as a million, are made redundant and there are substantial cuts in public spending in 2010, as proposed by some in the Conservative Party, five million unemployed or more is not inconceivable … They could be our lost generation.”

Richard Lambert, Director-General of the CBI, speaking on the Today programme this morning said:

“the economy is too fragile right now for massive cuts in public spending so we think that the government should be giving a credible plan for getting fiscal conditions into shape.”

This comes on the back of an article by John Maynard Keynes biographer and former Conservative peer, Lord Skidelsky, for the Sunday Telegraph. He wrote:

“Almost all that Osborne said [in his speech “The Conservative Strategy for Recovery”] is right and sensible in conditions of full employment; most of it is wrong and wrong-headed when there is heavy and persisting unemployment.”