The BNP's Richard Barnbrook has been suspended from the London Assembly and Barking and Dagenham Council for fabricating knife murders for electoral purposes. 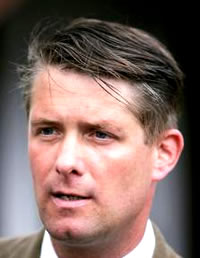 BNP high-flier Richard Barnbrook has been banned from the London Assembly for a month after being found guilty of bringing it into disrepute by fabricating murder stories to prey on people’s fear of knife crime.

Barnbrook, who described the City Hall standards committee investigation as a “total waste of taxpayers’ money” and a “kangaroo court,” became the first British far-Right politician to be elected to an assembly or parliament last year. He was also handed a month’s suspension from Barking and Dagenham Council, where he has represented Goresbrook ward since 2006, and is to be sent for training in ethics.

The case brought into focus the hitherto unknown London Patriot white-supremacist group, who arranged to bus supporters to yesterday’s hearing. They are one of a number of newly formed far-Right groups with close links to the British National Party – among them the English Defence League whom Left Foot Forward reported about on Monday.

London Patriot had a stall at the BNP’s recent Red White and Blue festival, a gathering that featured gollywogs being thrown onto bonfires, an anti-Fascist protester being chased with hammers and axes, people throwing wet sponges at a man in a Barack Obama mask locked in stocks, skinheads boasting of how they had driven black families out of their villages, ‘Sieg Heil’ salutes and speeches describing Judaism and Islam as “cancers.”

In 2008 Barnbrook was exposed by the News of the World for an affair with an immigrant, reportedly blitzing Finnish nurse Annika Tavilampi with “filthy texts and pictures” and asking her to marry him. She told the newspaper Barnbrook kept a copy of Hitler’s “Mein Kampf” under his bed.