In George Osborne's speech to Demos last week, he looked to Sweden to provide evidence for how a Conservative government could reform the education system and provide “more for less” while also delivering high standards. But the reforms would cost £1.2 billion and it's not clear that the Swedish system is the panacea that the Conservative Party suggest. 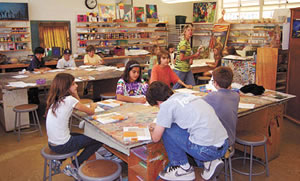 In George Osborne’s speech to Demos last week, he looked to Sweden to provide evidence for how a Conservative government could reform the education system and provide “more for less” while also delivering high standards.

Swedish ‘free schools’ are independent of political control and have to meet basic standards set by government in addition to following a core curriculum. Tory enthusiasm for the concept was first announced in 2007 when they published Raising the bar, closing the gap – their only Education policy paper under David Cameron’s leadership.

But Osborne’s rhetoric has not been backed up by any real explanation of how cost savings would be achieved in practice. In the 2007 paper, the Tories proposed an extra 220,000 school places (p. 9). Maintaining current levels of funding per child (set at £5,250 for 2010-11) would result in annual costs of £1.2 billion.

These annual costs cannot be covered by the proposed savings of £4.5 billion from the Building Schools for the Future programme (p.39) since this has been earmarked “for the building of New Academies.” But following George Osborne’s recent announcement that spending on schools would not be protected, it appears that both the building costs and annual funding costs of the Tories’ plans to create 220,000 new places are in doubt.

Even if they could find the money it’s not clear that the Swedish system is the panacea that the Conservative Party suggest. The Swedish reforms in 1990 were on the background of an economic downturn and a clamour to reduce public spending (sound familiar?). But a 2004 paper co-written by the respected Princeton economist Alan Krueger (now President Obama’s Assistant Secretary of the Treasury) outlined that spending per student as a percentage of GDP per capita declined from 34% in 1991 to 24% in 1999.

Most worryingly, the mid-1990s saw signs of increasing segregation by family background, growing variance in resource allocation between local authorities, and greater inequality in school outcomes – a trend which continued into the early parts of this decade. The paper suggests that all this has fallen disproportionately on those with poorly educated parents or recent immigrants.

Free schools in Sweden may have opened up the possibility of a different education system to a small proportion of children (8% of primary pupils and 15% of those in secondary schools), but for the majority that still find themselves in the state system, the evidence points to growing inequalities and an increasingly tough battle for scarce resources.