'Strike Map, who launched the campaign, announced yesterday that within a few hours, representatives for over 50,000 workers had already signed the letter supporting the right to strike.' 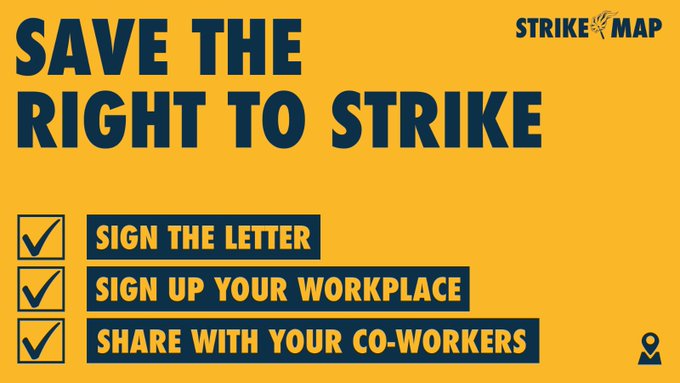 A trade union campaign has been launched to resist legislation which would undermine the right to strike.

Strike Map, who launched the campaign, announced yesterday that within a few hours, representatives for over 50,000 workers had already signed the letter supporting the right to strike.

An open letter, backed by trade unions and written to the Prime Minister, urges Rishi Sunak to reject new anti-strike laws, calling them “undemocratic and authoritarian”. The letter tells Sunak, “Should you proceed, you will face the determined opposition of workers. We aim to build a mass movement of millions to defeat your plans.”

The campaign, which encourages people to sign their workplace to the collective letter, is being supported by trade unions including ASLEF and the Fire Brigade Union, as well as the Morning Star and The Peoples Assembly.

This highlights the huge backlash against the anti-strike legislation put forward by the government, which threatens to enable employers in education, ambulance, health, fire, rail and nuclear commissions to sue unions and sack staff if minimum levels of service are not met.

Union leaders have come out against the oppressive legislation, with RMT General Secretary Mick Lynch calling it, “an outrageous attack on our civil liberties and on democracy in our country.”

In a statement, Whelan said: “Rishi Sunak, rather than doing the decent thing – the right thing – and negotiate with us, is trying, effectively, to ban industrial action. That is what authoritarian governments in authoritarian states do.

“This is – or should be – a free country. In which it is possible – and legal – to withdraw your labour. Which is, after all, a fundamental human right. Only in slave societies do they force men and women to work.”

Riccardo la Torre, National Officer for the Fire Brigade Union, put it succinctly in a recent interview with LBC: “To effectively force people to work against their will once they’ve organised and democratically voted for strike action, after exhausting all other avenues to address pay that has been attacked, pay that has been stagnating for over a decade, a crisis of this governments making.

“Once they democratically decided to remove their labour to do that, it is a fundamental democratic right that they should be allowed to do so.”