'This government is seeking to pacify the British public. They want to criminalise dissent against poverty.' 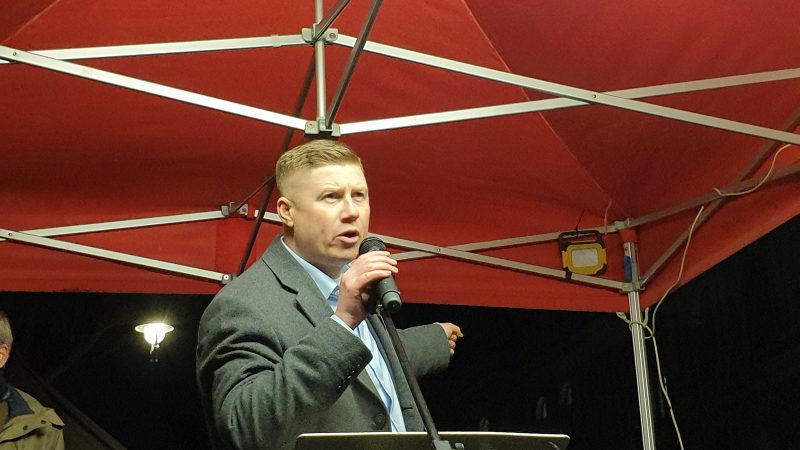 LFF interviewed the Assistant General Secretary of the RMT at the right to strike demonstration outside Downing Street yesterday evening.

As the government’s proposed minimum service bill received its second reading in parliament last night, demonstrators took to the streets to express their anger at the law which seeks to undermine workers ability to strike.

Eddie Demspey joined an impressive line-up of speakers calling out the legislation, which would see nurses, firefighters, teachers and other key workers potentially sacked for striking for fair pay.

Those on the podium included Jeremy Corbyn, Zarah Sultana and Mick Lynch along with other union representatives from the CWU, FBU, UCU and TUC, to name a few.

Dempsey spoke to LFF about the criminalisation of dissent against poverty, and said that if workers are prevented from the picket lines, then they will take it to the streets instead.

“This government is seeking to pacify the British public. They want to criminalise dissent against poverty.

“This is not a left or a right wing thing, this is a thing about the rights of ordinary citizens to have a decent life and the right to live in a free society where we can withdraw our labour.”

Demspey believes the government and right wing media have failed in their attempts to demonise trade union action because the public have had enough of wage inequality.

“They have failed because you can’t win an argument with a public who are all suffering after years and years of falling wages, watching profits go through the roof, watching our public services be underfunded and then bit by bit privatised.

“What we’ve seen over the past few years is that, after most public sector and frontline workers who kept this country going, most got pay freezes.”

This comes amid new ONS data today which revealed wages fell by 2.6% in real times over the year.

“People have had enough of this and it’s about time that the government and the political class recognise that. There has got to be a fair settlement for people.”

He also highlighted tactics already deployed by the government to curtail strike action, including using taxpayers money to indemnify employers against losses and allowing agency workers to come in and break strike.

These failed attempts by the government so far to prevent strike action have led them to seek to change the law instead, says Dempsey.

“This isn’t just a question about trade unions, this is a fundamental civil liberty and a human right.

“The right to protest, the right to withdraw your labour, these are the fundamental rights this government is seeking to undermine and remove in order to protect the corporate interests that they represent. So we have got to get a coalition of people together who are willing to stand up to freedom.

“We can’t sit down and watch them take away our rights, keeping people poor and tearing up all of our public services, we’ve got to defend what belongs to us.”

RMT’s General Secretary Mick Lynch united the crowd with the closing speech of the evening, calling for politicians to stand up for socialism and for workers. He reiterated Demspey’s calls for collective action: “Let’s fight and fight again for our future. See you on the picket line and see you on the streets.”

Unions including the RMT are expected to take legal action against the laws, whilst Labour has said they would repeal the legislation in government.