The Conservative media is building its assault on the union, demonising them as ‘communists and Kremlin supporters.’ 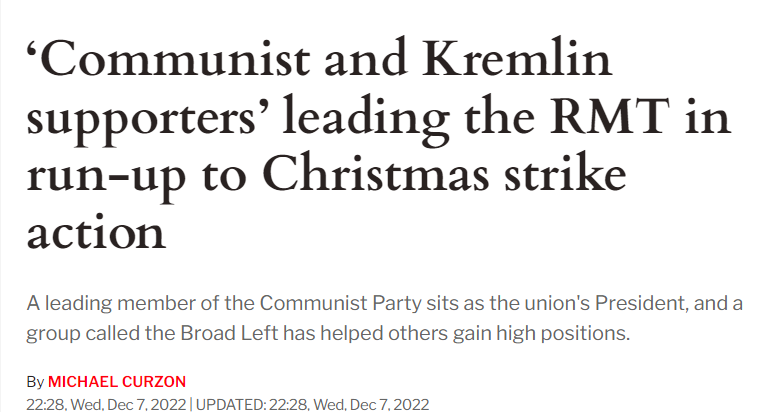 The right-wing newspapers have repeatedly warned readers that “militant trade unions” are “bringing Britain to its knees.” When industrial action over the Christmas period was announced in November, the same press mockingly labelled the RMT boss Mick ‘Grinch’, claiming he is ‘killing your Christmas.’

Efforts to smear the RMT and its leadership have moved up a gear this week.

‘Communist and Kremlin supporters lead the RMT,’ splashed The Times on Wednesday 7. The article claims that the leadership behind the rail union’s strike agenda includes a senior figure in the Communist Party of Britain and others who have ‘aped the Kremlin’s position on Ukraine.’ The piece alludes to Broad Left, a socialist group in the union, which, according to the report, claims to support the RMT’s aim of “suppressing capitalism through nationalisation of the railways and has offered its support to the Cuban and Venezuelan governments.”

The article claims that several members of the RMT’s national executive committee (NEC) were elected with the support of Broad Left, including Mick Lynch and Eddie Dempsey, who, says The Times, was supported by the group before the election in 2021.

Seizing the chance to implicate Jeremy Corbyn in the ‘communist and Kremlin-supporting RMT’ hype, the article informs how other NEC members include Jared Wood, a Socialist Party member, ‘who campaigned for Jeremy Corbyn.’

Predictably, the Express published the same deliberately smearing story, claiming that a “leading member of the Communist Party sits as the union’s president, and a group called the Broad Left has helped others gain high positions.”

“Communist and Kremlin supporters” are leading the National Union of Rail, Maritime and Transport Workers (RMT) in the run up to Christmas strike action” reads the inflammatory article.

In response to an article published in The Telegraph in March, which provocatively asked ‘How close is the RMT union to Vladimir Putin’s Russia?’, a RMT spokesperson had said:

“The union does not support either Vladimir Putin or his actions in Ukraine, and we are backing global union pressure for a peaceful resolution to the conflict.”

The right-wing media’s efforts to demonise unions come as Rishi Sunak is facing growing pressure from Tory MPs to push ahead with anti-strike laws. On Tuesday, ministers accused the RMT union of “holding the country to ransom,” by scheduling walkouts over Christmas.

Sunak has said he is working on “new tough laws” to protect people from strike disruption. A bill has been introduced to Parliament, which would ensure minimum service levels of transport networks during strikes. The bill has yet to be debated by MPs and peers.

Though it seems that Tory MPs’ demands to clamp down on strike action, and the right-wing media’s continued efforts to demonise the RMT, are not translating into public opposition towards the strike action.

Not only is there admiration for both Mick Lynch and Eddie Dempsey for completely ‘bossing interviews’ and flooring critics in the media, but the public remains generally supportive of the strikes.

An Opinium poll for the Observer on December 4 found that 57 percent of people surveyed support nurses going on strike for two days this month. Only 30 percent opposed it. Meanwhile, 42 percent blame the government for the pending train strikes (23 percent) and train companies (17 percent), with 37% holding the unions principally responsible.