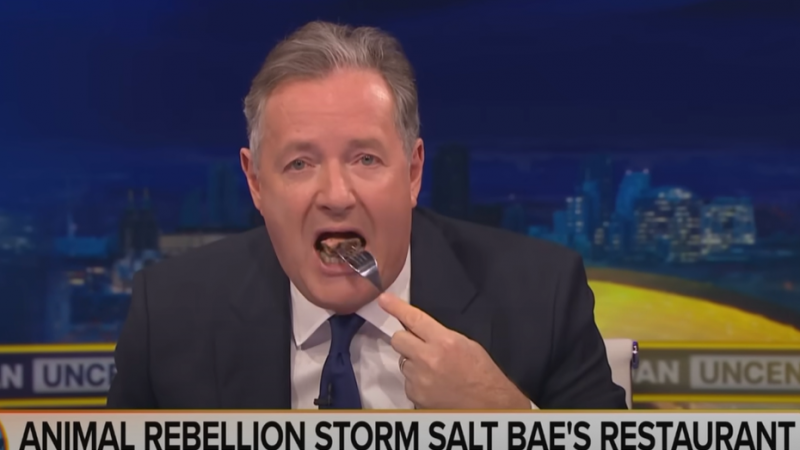 The outspoken presenter attempted to prove a point by eating steak in front of a vegan activist. The stunt backfired, condemned as immature, rude and odd.

McGovern was there to discuss the recent Animal Rebellion demonstrations, which have included protesting at Salt Bae’s restaurant in London.

Starting the interview with a childish, personal insult, Morgan said: “I don’t like vegans very much… you all look pretty pasty faced and unhealthy to me.”

“What I don’t do is I don’t go running into vegan restaurants and start screaming abuse at you all and have to be pulled out by people because you’re ruining everyone’s fun,” he continued.

McGovern tried to explain the process of precision fermentation, which he claims is creating animal protein using a “fraction of the land” and “carbon footprint.” To which the TalkTV host interjected: “But I like eating meat.”

As the debate continued, Morgan decided to stir things up, whipping out a piece of steak while saying that “none of you make me want to change my mind” before shovelling it into his mouth.

To which McGovern replied:

“That is absolutely fine, Piers.”

It didn’t take long for the debate to rally reaction on social media, with viewers turning to Twitter to share their contempt towards the host’s ‘childish’ meat-eating antics.

“Very very odd. And rude. I’m a vegan with meat eating friends. We have mutual respect for each others choices,” wrote one Twitter user.

“Television content at its absolute worst. Have a word Piers. How old are you, 12?” said another.

One viewer sarcastically commented: “Got to give credit to the primary school child that came up with the steak idea. Straight from the playground. Epic journalism.”

Others alluded to the show’s poor viewing ratings, which, ironically, managed to attract more viewers when the host was on holiday and Nadine Dorries stepped in.

Despite millions being invested into the channel, which is owned by Rupert Murdoch, TalkTV has struggled with ratings since its launch earlier in the year.

Even Morgan’s ‘tell-all’ interview with Cristiano Ronaldo about Manchester United, failed to meet the expected viewership and brought in a mere 334,000 viewers, despite a dramatic build-up.

Following the farcical meat-eating stunt, one viewer said: “Is it any wonder only 20,000 people watch this crap.”