This is an important lesson about surviving adversity, building local communities and thriving. 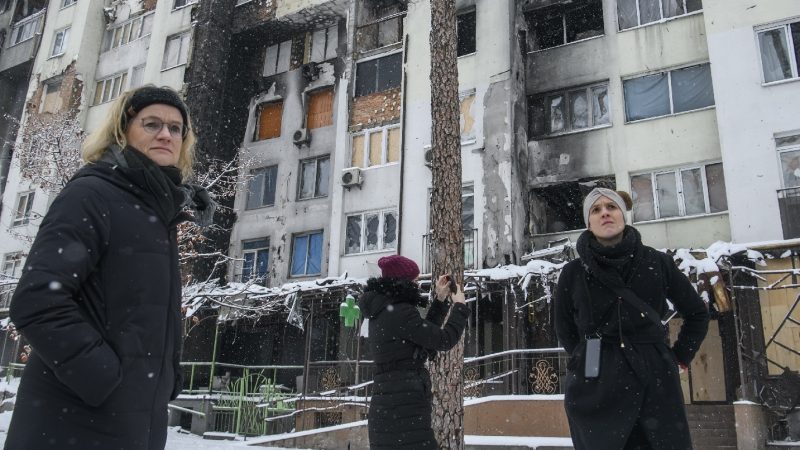 The small Ukrainian city of Irpin, not far from Kyiv, famous as a site of resistance to invasion in the early days of Russia’s attack on its neighbouring state, has many lessons for a visitor, as I found last weekend.

There’s the visceral up-close reminder of the pointless, awful destruction of war – the clearly much-loved cultural centre smashed to pieces, the school now roofless and windowless, a ruin through which the snow blows, the seemingly random destruction of a bungalow here, a block of flats there, a glass-fronted shop demolished on the corner.

And the military lesson about the way in which smaller, lightly armed forces, desperately defending their homes can – sometimes – hold back far more, more heavily armed troops. The people of Irpin talk with understandable pride about that, whilst acknowledging how the military experience of some from Russia’s last invasion of Ukraine, in 2014, was invaluable.

But the lesson that I hadn’t expected from my visit – the lesson that has immediate resonance in the UK – was about the importance of the local and regional in the reconstitution of a shattered community.

As a deputy mayor of Irpin said to our group of visiting Green MEPs and MPs: “After the war the big companies will go to Kyiv. They won’t come here.”

He was making a point that was echoed by civil society representatives and campaigners who we met in the Ukrainian capital (they came to us, in the hotel with a very good bomb shelter, a sensible precaution after a week of vicious, unpredictable Russian bombardment across the country).

The civil society representatives – so crucial in the changes in Ukraine before the war that saw its society opening up, its police and financial institutions strengthened (all the things that have now made joining the EU an imaginable option) –  are begging the international community to ensure that, in creating a new Ukraine from the ashes created by Russia, support does not just flow to central institutions (already made more powerful by the inevitable exigencies of war).

They want to see that as much as possible is delivered direct to local and regional institutions. There, they said and as we well know, it is often better and more fairly used, as well as being less at risk from corruption.

The civil society groups stressed too that terminology is important. The talk should not be of “rebuilding”, for the plan must not be like-for-like replacement of what was here before, but to create a new climate- and nature-friendly, socially just, society.

Irpin has lessons too about that. The deputy mayor told us that solar-panelled medical facilities fared better than most amid the chaos, having an independent source of power meant they could keep operating even amidst the fighting, or at least quickly restart afterwards. Decentralised green energy is resilient energy, unlike big centralised supply systems, so vulnerable to attack (a fact the Russians are deliberately using right now) or other shocks.

It isn’t easy for big central institutions, UN bodies or national governments, to relate to local government and local institutions. So as we discussed with the officials in Irpin, there’s enormous potential for human links to be built across the continent and beyond, for twinning arrangements, for perhaps hospital-to-hospital or school-to-school links, to offer support at a scale that works for both sides.

But there’s a problem with that in the UK, of course. Councils and other local institutions, now desperately strapped for cash and resources, are going to find it hard to engage in these kinds of ties, that could be so beneficial to them as well as battered Ukrainian cities and towns.

For that Irpin put up a tough fight against the Russian was not just a result of military experience and grit. It was a place that, the officials told us, had built it strengths in a determination to strive and thrive. It was growing fast before the Russian attack, its population swelled by internally displaced people from the east from the 2014 war, carefully welcomed and supported in rebuilding their lives.

Opportunities for them came from promotion of Irpin as a place to visit, with beautiful green spaces (six major parks), and excellent sport facilities. (The sports stadium – you guess it, smashed up by the Russians – got a fancy new roof, now bullet-shredded, only in 2021.) “We didn’t want people to go to Kyiv for leisure,” the deputy mayor said. “We wanted them to stay here.”

And I’ve no doubt that Irpin will rebuild, and again thrive. It deserves our direct support and engagement to help with that – and those who deliver it will get a great deal of benefit in understanding about surviving adversity, building local communities and thriving, in return.