The RMT boss is back flooring critics in the corporate media with his no-nonsense, down-to-earth attitude. 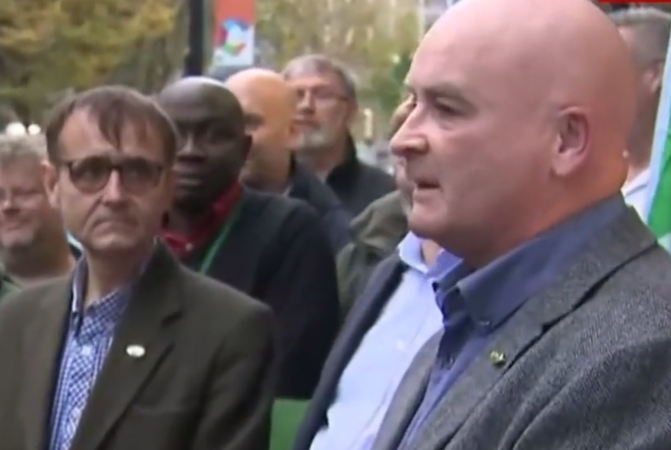 When announcing the fresh round of strikes yesterday in front of the media, a Daily Mail reporter asked Mick Lynch if he’s proud of being known as ‘Mick Grinch.’

In his typical blunt fashion, the RMT chief coolly replied: “I expect that from yourself. That’s the sort of quality journalism I’ve come to expect from your particular dark corner of Fleet Street.”

He went on to say: “I’m not the Grinch, I’m a trade union official, and I’m determined to get a deal.”

The clip quickly went viral on social media, with people sharing their solidarity and admiration for the union boss.

“Mick is such class. They keep trying to take him down with their nonsense, and he just bats it straight back, without skipping a beat,” one Twitter user posted.

The RMT union has announced a series of winter strikes, including two 48-hour strikes in mid-December and two more in the new year.

Thousands of members of the RMT working for Network Rail and 14 train operating companies will strike on 13 – 14 and 16 -17 December. The additional strikes in the new year will take place on 3 -4 and 6 – 7 January.

The union has also announced there will be an overtime ban over the Christmas period, from 18 December to 2 January.

The industrial action was called after talks with the Rail Delivery Group, which represents the Train Operating Companies, broke down. RMT says operators have refused to make their “promised written proposals” in the ongoing dispute over jobs, pay and conditions. Mick Lynch has accused the government of “directly interfering” in negotiations.

The announcement of a fresh wave of rail strikes come as 1,000 members of Unite working the bus company Abellio in London walked out. Further strikes involving bus drivers are due to take place on November 25 and 26, and December 1, 2, 3, 9, 10, 16 and 17. Unite says Abellio had failed to “enter into meaningful pay talks.”