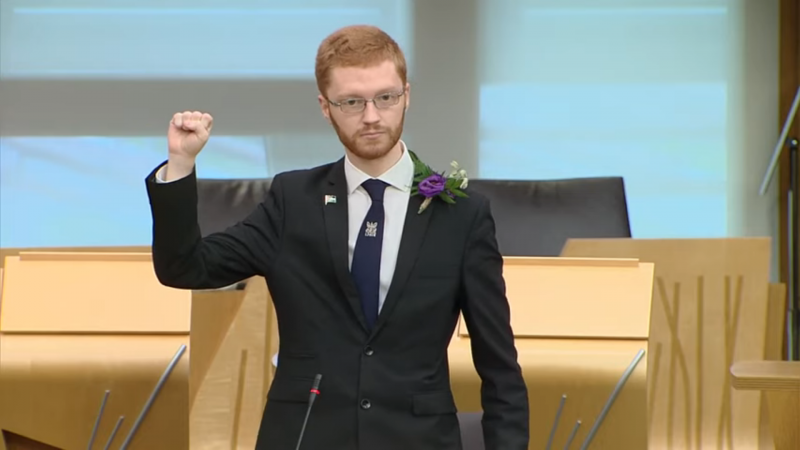 The Scottish Green Party have been part of the Scottish Government for over a year. Since signing up to a cooperation agreement with the SNP in August 2021, the party’s co-leaders Patrick Harvie and Lorna Slater have held ministerial office – the first Greens in government in the UK.

While not a government minister himself, Ross Greer MSP is nonetheless a significant figure in the Greens as a new party of government. As one of the seven Green MSPs, he holds parliamentary office. And as the Scottish Greens’ co-chair, he plays a key role internally within the party.

Greer was a guest speaker at the Green Party of England and Wales (GPEW) conference in Harrogate this weekend. At the event, he spoke to Left Foot Forward about the Greens’ role in the Scottish government and the movement for independence.

One area the Greens have been most keen to talk up their success on is the rights of private renters. Patrick Harvie holds the ministerial portfolio for this area, and the cooperation agreement with the SNP committed the government to introduce rent controls. Greer says that it is a “really clear example of the shift that we’ve been enable to deliver within government”, adding that until recently, “the power dynamic between landlords and tenants had been largely untouched.” According to Greer, Greens in government are “finally beginning to redress that”.

There has been criticism from some in the tenants’ rights movement over the pace of introduction of this policy – rent controls are currently set to come into effect by 2025. Greer, however, is adamant that they will be introduced and the Greens’ commitment to it is unwavering.

Paying tribute to the tenants’ union Living Rent, which he said the Greens “absolutely give credit to” for “an amazing job making sure this is at the top of the political agenda”, Greer said, “We are going to deliver rent controls, and we are going to do it in this session of parliament, and we’re going to do it as quickly as we possibly can.” He added, “We just need to address the reality of delivering a brand new of law to create that system of national rent controls in Scotland doesn’t require amending existing legislation. It requires creating a whole new area of law and a whole new system to actually deliver those rent controls. Unfortunately that’s complicated. Unfortunately that means taking more time than we would want.” Reflecting on his belief that a legal challenge is “all but guaranteed”, he said that the lengthy lead in time for rent controls is to ensure the government delivers “something that’s permanent, not something that will fall apart at the first legal hurdle.”

Also on the Greens agenda right now is the question of Scottish independence. The Scottish Government is currently facing a legal battle at the Supreme Court over whether it has the power to hold a planned second referendum on independence in October 2023. Greer feels confident that if a referendum is permitted, the independence movement is in a strong position to win it.

Arguing that the arguments of the no campaign in the 2014 referendum campaign have been “completely obliterated” – arguments around Scotland’s continued membership of the European Union, the strength of the British economy and so on – Greer believes that the pro-independence side has a clear advantage. Greer said, “I’m really optimistic about our ability to present a really positive vision and not to have to spend nearly as much time as we did last time answering the deliberately misleading questions of the no campaign because they now have far more questions to answer. Last time round it was a choice between change – radical change – with independence or the ‘safety and stability of the UK’. It’s quite clear now that staying in the UK is not a safe and stable option. So the question that we’ll be putting to people is – ‘do you you want control over that uncertain future?’

“We recognise that the coming decades are going to be turbulent – whether it’s because of global economic unrest or the climate crisis shifting geopolitics. Is it better to have the people who actually live in Scotland be in charge of how we navigate that or to leave that to Westminster? That at its absolute core is probably the single most significant shift from last time. They cannot claim that staying in the UK is the safe and stable option anymore.”

While the Greens in England and Wales are holding their conference this weekend, some eyes in the Green movement will be watching carefully what happens when the Scottish Greens meet for theirs in two weeks’ time. Although they already separate parties, Greens north and south of the border naturally have strong connections, both informally and structurally. However, at their conference in mid-October, the Scottish Greens will be debating whether to maintain or sever their ties with their colleagues in England and Wales. The point of contention is GPEW’s handling of transphobia in their ranks – with some prominent figures having been accused of making transphobic comments and the party’s internal processes charged with being inadequate for dealing with issues of discrimination and oppression.

Greer is uncharacteristically reticent to get drawn into taking a position on the motion itself. He says it’s a “really important” debate to have within the party, but also concedes that he is “reluctant to comment” or to be seen to be trying to “tilt the scale in either direction”. Instead, he says that he is “exceptionally proud” of the Scottish Greens’ policies on trans rights, and what he claims is their “ability to consistently live up to that even in challenging circumstances”. He points to the Scottish Greens’ role in driving forward trans rights in the Scottish Government, saying, “I want our members to take some credit for the significant advances that we’re going to make on trans rights in this session of parliament”. He added, “We’re going to reform the Gender Recognition Act in Scotland. We’re doing that right now. We’re going to ban conversion therapy and that ban will include gender as well as sexuality. We are reforming trans healthcare – that’s going through a crisis transformation at the moment. They are all happening because the Greens put them into the Scottish government’s programme.”

Nevertheless, Greer says he takes “a lot of strength from recent internal results in the Green Party of England and Wales”, and that there have been “really significant improvements” in the party on handling transphobia. He added “I think real progress is being made – whether you look at Zack [Polanski]’s election as deputy leader, whether you look at the [Green Party Executive] results recently, the repeated confirmation of party policy when these issues come up to a vote at Green Party of England Wales conference – it is abundantly clear where the overwhelming majority of GPEW members are on this. That being said, I think it’s obvious to everybody why some of the behaviours, some of the situations within GPEW has caused so much upset to Scottish Green members – particularly trans and non-binary members.”