"We are the working class. We will not be divided." 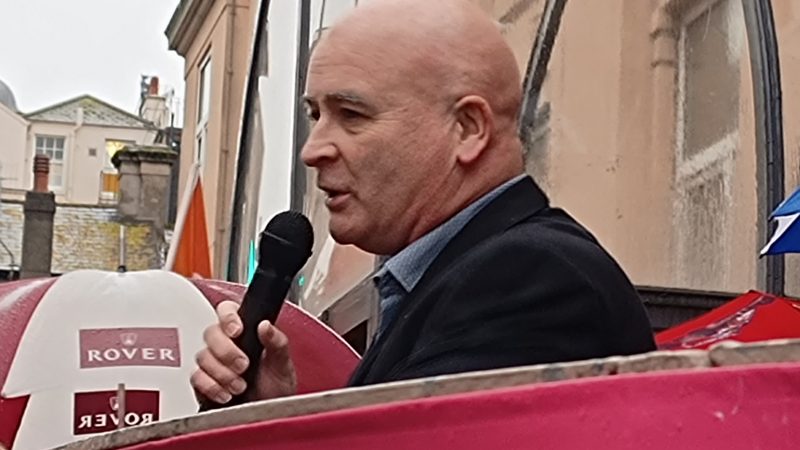 Hundreds of trade unionists joined a rally in support of the CWU strikes at Royal Mail, BT and Openreach this morning. The rally took place in Brighton, where key figures from across the trade union movement are currently meeting for the annual TUC Congress.

Despite lashing rain, the mood was buoyant and the atmosphere electric at the rally, which was addressed by general secretaries from a number of unions.

GMB general secretary Gary Smith was greeted by cheers when he told the rally, “Your dispute, and the disputes that are going on all over this country – we are going to win!” He later said, “The people of this country are behind us and the thousands of other disputes”.

Kevin Courtney of the National Education Union highlighted the difference between the amount of money paid out to Royal Mail’s shareholders and that offered to its workers. He told the rally, “The company made £758 million in profits last year. It gave £400 million to shareholders. It can afford to give you a pay deal. So victory to the postal workers is what I say!”

Speaking on the ongoing wave of industrial action taking place across a number of sectors at the moment and the role of the trade union movement, the UCU’s general secretary Jo Grady said, “The power to change this country is in our hands”, and that “the most important word in the language of the working class is solidarity.”

The TUC’s general secretary Frances O’Grady also addressed the rally. She said, “It’s an absolute honour to bring solidarity on behalf of six million workers to the brilliant posties of Brighton!” She later added, “There are workers up and down this county who are fed up to the teeth of being told to tighten our belts, accept real pay cuts, when the boardroom is raking it in, when shareholder dividends are going through the roof and when bonuses at the top are at record levels. And we are saying enough is enough!” O’Grady also commented on the ongoing chaos in Westminster, saying, “there’s a silver lining” to it, in that “Liz Truss has finally found out what it’s like to be on a zero hours contract”.