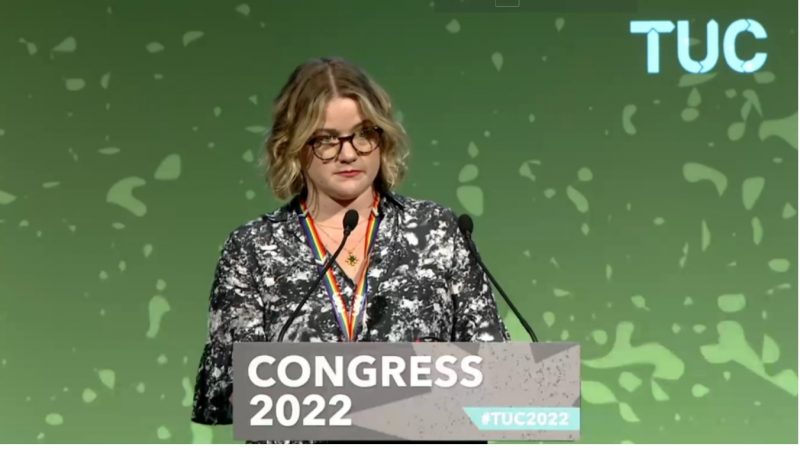 The text of the motion claimed that, “over the past few years, national and global resistance to LGBT+ rights has been led by an alliance of governments and networks of anti-LGBT+ organisations”, and argued that “the trade union movement must play a central role in creating better workplaces and preventing discrimination at work by the means of organising, education, alliance-building and bargaining”.

The motion called for the TUC’s general council to “launch a TUC alliance” for the rights of trans and non-binary people, and to “continue to publicly challenge organisations that seek to create hostility for trans and non-binary rights in the UK and counter political attacks on them using all tools at [the] TUC’s disposal”. TUC affiliates will also be provided with guidance that they can give to employers on how to support trans equality in the work place.

Delegates from Unison, the CWU, the GMB, the NEU, Equity and the NASUWT and other unions spoke in favour of the motion, which was backed overwhelmingly.

Jo Grady, the UCU’s general secretary said in the debate on the motion, “Trans people make up 1 per cent of the population in the UK, but their existence is being increasingly treated as though it should be requiring a public debate. Trans people are threatened, intimidated, attacked and dehumanised often by people who should know better.”

The general secretary of creative workers’ union Equity, Paul Fleming, said when speaking on the motion that the attacks on trans people currently taking place in society, politics and the media were part of a wider anti-LGBT campaign. He said, “Gay men, lesbian women have to be absolutely clear that we are next on the list.”

Earlier at this year’s Congress, Angle Eagle MP told delegates that the next Labour government would ban trans conversion therapy at a fringe meeting called ‘Trade Unionists for Trans Rights’.