Quite the factual inaccuracy. 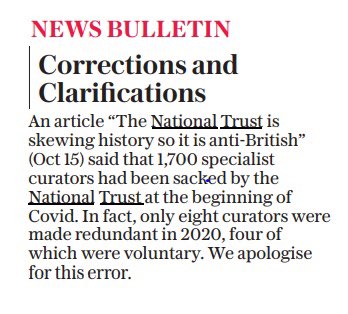 The Telegraph has been made to issue quite a jaw-dropping correction for publishing a false claim about the National Trust.

In an article printed on the 15th October, with the headline: “The National Trust has an agenda – skewing history so it’s anti-British’, the paper claimed that the National Trust had sacked 1,700 specialist curators at the beginning of Covid, when in actual fact only eight curators were made redundant.

The paper has been made to issue a correction, writing: “An article, “The National Trust is skewing history so it is anti-British” (Oct 15) said that 1,700 specialist curators had been sacked by the National Trust at the beginning of Covid. In fact, only eight curators were made redundant in 2020, four of which were voluntary. We apologise for this error.’

Quite the factual inaccuracy. The article was published ahead of the next AGM for the National Trust on November 5, with the pressure group, the Restore Trust, hoping to get its candidates elected on to the Trust’s council.

The Restore Trust, which has no connection to Bristol-based non-profit The Restore Trust, is a self-styled ‘anti-woke insurgent’ group which began its campaign in 2021, in the wake of the publication of a report by the National Trust that highlighted connections between 93 of its historic places and slavery. Restore Trust took exception to the report claiming it “presents a strongly negative view of Britain, and which does not properly represent the scholarly consensus.”

Restore Trust believes the National Trust has lost focus on its original purpose and describes itself as “a forum where members, supporters and friends of the National Trust can discuss their concerns about the future of the charity.”