“The fact that Mordaunt ultimately lost out to the Mail’s favoured candidate Liz Truss, who has gone on to win election as Prime Minister, shows how powerful newspapers still are in politics." 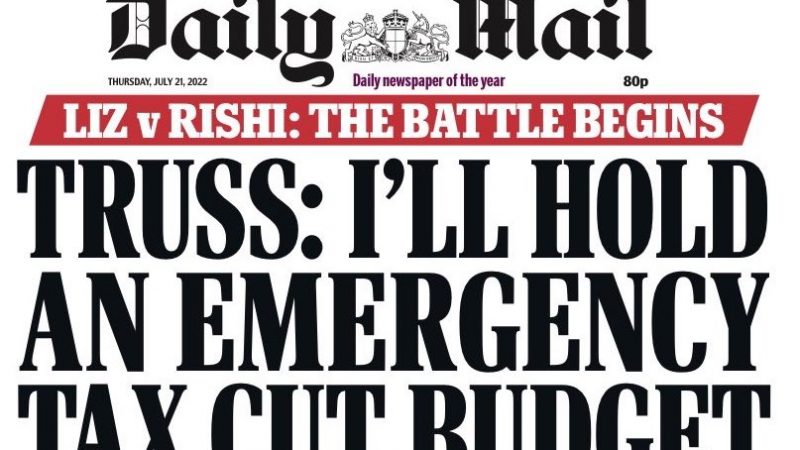 When the Tory leadership election began, Liz Truss was far from the clear-favourite to replace Boris Johnson as prime minister. All of that changed however, as the race progressed and the right-wing press launched ferocious attacks on her opponents, tilting the odds in her favour.

Now new research carried out by campaign group Hacked Off, which analysed hundreds of articles published in Conservative Party-supporting newspapers, shows the sheer scale of press bias in the Tory leadership election.

Although the Tory press was divided, the research found that Penny Mordaunt’s campaign faced an extraordinary onslaught of hostile coverage across the press, ‘with the Mail leading the way with a total of 36 articles found to be critical of the candidate for PM over the 2 weeks Tory MPs were voting – and only 1 found to be positive’.

The research is based on a review of every article about the Conservative leadership race across the period July 7th to July 20th.

The analysis also found that the Mail waged the most partisan campaign out of the Tory papers, with 89% of the paper’s references to Truss appearing to put her in a positive light, while only 10% of references to Sunak appeared to be positive.

Kemi Bandenoch won the best coverage overall, with each Tory paper tending to report positively on her campaign.

Hacked Off released a statement in which it said: “The fact that Mordaunt ultimately lost out to the Mail’s favoured candidate Liz Truss, who has gone on to win election as Prime Minister, shows how powerful newspapers still are in politics.

“The way Conservative-supporting newspapers, on balance, rallied around the more right-wing candidates suggests that the Tory-backing press has become more extreme and is shifting further away from the political centre-ground in those newspapers’ leanings and coverage.

“The fact that even Rishi Sunak – a Chancellor of Johnson’s administration and committed Brexiteer – now appears to be considered too “left-wing” for The Mail and The Telegraph shows just how extreme the Conservative-backing press has become.”