The Daily Mail thinks following due process and finding out whether our prime minister misled Parliament is a witch hunt. 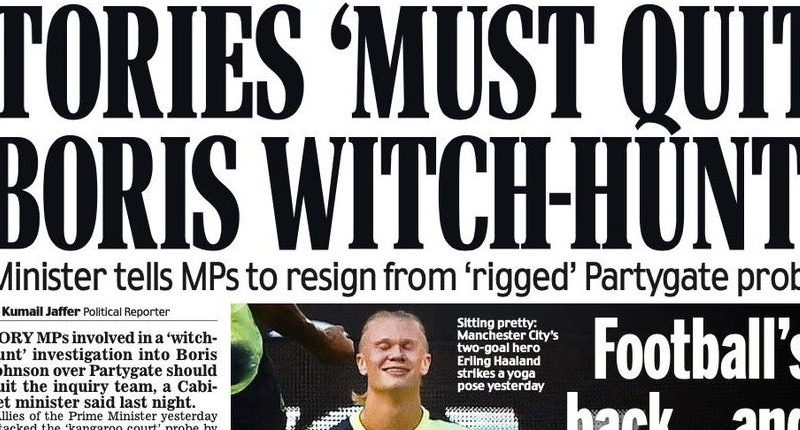 The Daily Mail thinks following due process and finding out whether our prime minister misled Parliament is a witch hunt, as it dished out the ‘enemies of the people’ treatment to four Tory MPs for daring to be on the committee that will investigate Boris Johnson.

The paper’s front page today has been slammed by critics, as it ran the headline: “Tories must quit Boris Witch-Hunt”, with Johnson’s aides telling MPs they must quit the ‘rigged partygate probe’ and alleging that the committees remit has been ‘rewritten in order to facilitate a guilty verdict’.

The Commons’ Privileges committee is investigating whether Johnson committed a contempt of Parliament by misleading MPs with his repeated partygate denials.

Culture Secretary Nadine Dorries, a staunch supporter of Johnson tweeted yesterday: “If this witch hunt continues, it will be the most egregious abuse of power witnessed in Westminster. It will cast serious doubt not only on the reputation of individual MPs sitting on the committee, but on the processes of Parliament and democracy itself”.

Labour MP Chris Bryant replied: “Let’s talk about abuse of power such as illegally suspending parliament or doling out peerages to donors or tearing up the rules to protect Owen Paterson.

“The real abuse of power would be suspending an inquiry to protect your mate.”

Zac Goldsmith, an old Etonian pal of Johnson and who was given a life peerage by the prime minister also believes the probe is ‘rigged’. He tweeted: “The partygate probe is clearly rigged.

“It is a jury comprised of highly partisan, vengeful and vindictive MPs, nearly all of whom are already on the record viciously attacking the person they are judging. It is an obscene abuse of power.”

Andrew Adonis wrote in reply: “How about Boris’s illegal prorogation followed by an unprecedented swamping of the H of L with cronies, yourself included”.

The Mail was accused by James O’Brien of giving four Conservative MPs the full fascistic ‘Enemies Of The People’ treatment.

He tweeted: “Their crime is to be on the committee that will investigate Boris Johnson’s alleged lies to the House of Commons while not being sufficiently sycophantic and/or cultish.”

Political editor of Byline Times Adam Bienkov tweeted: “The only “witch-hunt” in action here is an attempt to destroy an independent committee of MPs before its investigation has even properly begun.”