'As it stands, there is a severe lack of safe and legal routes to the UK for the vast majority of refugees.' 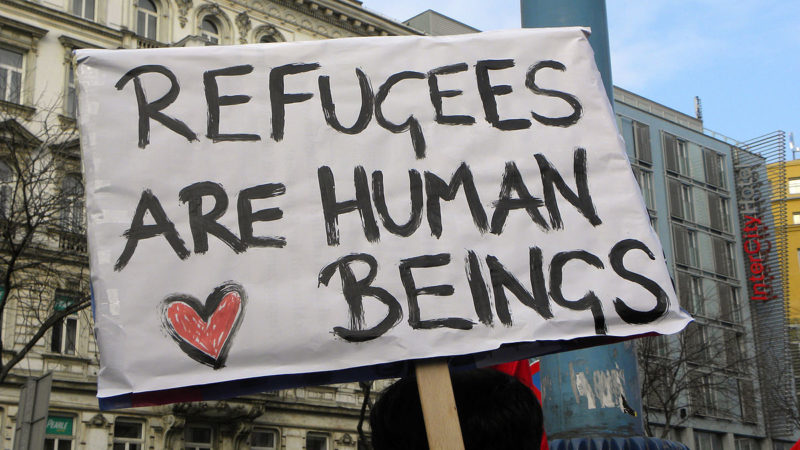 The United Kingdom has a proud history of providing sanctuary to those in need, but now we are falling short of what is expected of us

With crises mounting across the world due to armed conflict, food insecurity, and climate change, the number of people experiencing forced displacement will only increase in the years ahead.

Yet successive Government policies have left the country wholly unprepared to effectively respond to an increasing influx of refugees whilst also creating a hostile and inhumane environment for those trying to claim asylum in the UK.

As it stands, there is a severe lack of safe and legal routes to the UK for the vast majority of refugees. The UK only has a handful of certified resettlement schemes, which are only available to certain nationalities such as Ukrainians, Afghans and previously Syrians.

These resettlement schemes also have narrow eligibility criteria. The route open to Afghan refugees, for example, only left those who directly worked with the British Government eligible, leaving thousands still vulnerable to threat of Taliban persecution at home.

A lack of legal routes and inability to apply for asylum abroad causes many to turn to illegal and unsafe routes out of sheer desperation. Out of 4,540 people detected crossing the English Channel between January and March 2022, almost a quarter were Afghan – the largest nationality recorded.

Even for those who did make it to the UK, there are still many barriers to resettlement.

The Home Office has struggled to find asylum seekers and refugees permanent housing in recent years. Tens of thousands of Afghan refugees who came to the UK following the evacuation of Kabul, are currently living in appalling conditions in bridging hotels whilst awaiting resettlement. We have a moral obligation to support these refugees in the UK once they have escaped persecution. However, the Government’s plan has failed to support many Afghans in rebuilding a life in the UK, whilst also costing £4.7 million a day.

In an effort to address the lack of accommodation, the Government has proposed to re-open Campsfield detention centre near Oxford, which was originally shut in 2018 following years of criticism and controversy.

The Conservative Government’s proposed solution to fix our broken asylum system is to adopt a policy of offshore detention. This policy proposes sending asylum seekers from the UK to Rwanda whilst awaiting the verdict of their application.

The Government claims the plan would deter refugees from making the illegal and dangerous journey across the Channel. However, this is disputed by a recent Home Affairs Committee report, which states there is no clear evidence of this policy having a deterrent effect.

The Rwanda policy also violates international law. The Government’s first £500,000 deportation flight to Rwanda was halted at the last minute following an intervention from the European Court of Human Rights.

This hostile system puts a severe strain on the mental health and physical well-being of applicants and wastes taxpayer funds on expensive and ineffective policies amidst a cost of living crisis.

It is beyond time to rectify these injustices.

The Liberal Democrats would completely reform the asylum system in the UK to create a system which supports the validity of the process, whilst still upholding human rights.

The first step would be to end indefinite detentions for asylum applicants and refugees. The UK is the only country in Europe to have an indefinite detention policy. This causes undue stress on individuals whose applications are left in an unknown status for months or even years after they’ve already experienced unimaginable trauma.

By ending indefinite detentions and stripping immigration powers from the Home Office, visa and asylum applications can be made in a quick and fair manner which respects the human rights of applicants.

We also have the power to restore dignity and common sense by allowing asylum seekers to work whilst their case is being decided. This would allow applicants to earn enough to afford a basic standard of living whilst also addressing the labour shortage in the UK. Yet despite repeated attempts from MPs to introduce such a measure in the Nationality and Borders Bill, the Conservative Government remains opposed to providing asylum applicant the right to work.

The best way to thwart smuggling and trafficking gangs is for the Government to establish safe and legal routes to sanctuary which respect the human rights of those involved. Until that is done, desperate people will continue to risk their lives by crossing the Channel.

This lack of accessibility can be addressed by cooperating with international partners to open asylum application centres throughout mainland Europe, especially in France.

Moreover, the number of refugees currently eligible for resettlement schemes is simply not enough, and the criteria is too limiting by excluding so many nationalities. Therefore, many try to reach the UK to then apply for asylum. If they could process this application from abroad, or could apply to a resettlement scheme, this would reduce the number who try to reach this country via the Channel.

The Department’s policies have also inhibited thousands of unaccompanied asylum-seeking children from reuniting with their families in the UK, leaving their status in limbo. The Liberal Democrats would introduce an aim to resettle 10,000 unaccompanied refugee children in the UK over the next ten years.

The UK boasts a proud history of providing sanctuary, but our standards pale in comparison to what they can and should be. The recently revealed story of British Olympic medallist Sir Mo Farah keeping his true identity and story secret for decades after being trafficked to the UK as a child from Somalia exposes the inhumanity of our current immigration system.

We can fix that.

By ending indefinite detentions and establishing safe and legal immigration routes, we can restore our reputation as a haven to the world’s most vulnerable and fulfil our moral duty to help displaced people across the globe.