Let's return to Aneurin Bevan who also famously said that “the NHS will last as long as there are folk left with the faith to fight for it.” 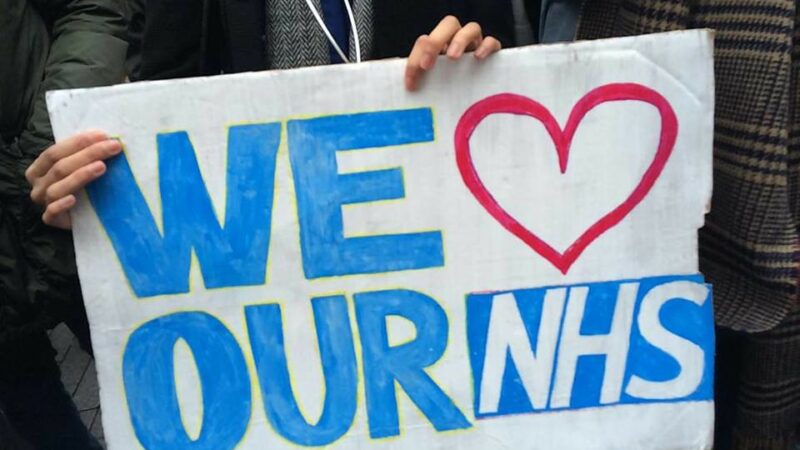 We are facing a crisis in the NHS. The Tories want us to blame Covid.

But the crisis was brewing long before the pandemic hit. Our health service has been hit by a triple Tory whammy: underfunding, pay cuts for the staff, and restructuring which in the Tory lexicon is another word for privatisation.

“Illness is neither an indulgence for which people have to pay, nor an offence for which they should be penalised, but a misfortune the cost of which should be shared by the community.”

That is how Aneurin Bevan, the Labour Health Secretary who oversaw the creation of the NHS, described its founding principles. It is socialism in practice.

For that reason, the Tories cannot ideologically accept the principles of our NHS.  Secretly, they hate it.

For two reasons: First because it is the severity of your illness which decides how quickly you are treated, rather than the money in your wallet; and secondly because it was never intended that spivs, profiteers and tory mates should make money out of other peoples’ illness.

As far as they are concerned, the NHS is a 74 year mistake. It is also the biggest untapped treasure chest for the private sector.

Let’s be clear, our NHS is under savage attack. Firstly, they have cut the funding to the NHS relative to need.

Secondly, they have frozen pay or cut jobs in the NHS for a decade leading to burn out and demoralisation in the workforce. Pay freezes and now real terms cuts when inflation is taken into account means that nurses’ pay is set to fall by £1600 this year.

Thirdly, they have privatised or outsourced many NHS functions – often to their chums in private health. This began with the Health and Social Care Act 2012, which required local health bodies to tender services to private health companies. This has cost the public purse a great deal of money which has often gone into the pocket of shareholders and has resulted in a poorer quality of service.

The consequences of these Tory policies are devastating. And let us underline the point that the current difficulties didn’t arise simply because of Covid.

When they took office in 2010, the number of people waiting for routine treatment in the NHS stood at 2.5 million. Before the pandemic was even heard of, the waiting lists had grown to 4.5 million. Now the figure is 6.5 million and rising.

There are 1,134 fewer GP practices in England and 1,622 fewer fully qualified GPs since 2015. As a result there are 2,026 more patients per GP in England. The public is not receiving the care they need, when they need it.

And the working conditions for our NHS staff are nothing short of a disgrace. Last month we learned that low-income nurses are being forced to queue at food banks to feed their families after finishing shifts because they do not have enough money to get by in this cost of living crisis.

Only a few years ago they were hailed as the heroes of our nation. Now they are being totally disregarded.

The NHS crisis is not a result of unforeseen circumstances, although covid has made things worse. It is the product of over a decade of policies designed to undermine our socialised healthcare model through underfunding and privatisation. Or – to put it more bluntly – bungs to their associates in the private health care sector.

Firstly, our NHS staff deserve a proper pay rise. In July of last year a petition with 800,000 signatures was presented to Parliament calling for a 15% pay rise for health care workers. This is the least they deserve when inflation is standing at 10%.

Secondly, we must increase the NHS budget to reflect the post-covid world and recruit high quality staff to tackle growing waiting lists.

Of course these first two items will cost money, and the government will say we can’t afford it. But the money required will equate to just a fraction of the additional wealth that has been accumulated by the super-rich in the last twelve months alone. The money is there to fund our NHS properly if there is political will to make the richest contribute a little bit more to society.

Our third objective is that we end privatization of health services. Further outsourcing within the NHS is likely to drive down workers’ terms and conditions further. But the consequences are felt by patients too. Analysis published in The Lancet public health journal by the University of Oxford shows that the increase in outsourcing to the private for-profit sector in England has corresponded with an increase in the number of patients dying of treatable causes. It is thought that 557 additional deaths between 2014 and 2020 might be attributed to the rise in outsourcing.

We must not mince our words about what this analysis reveals. Privatisation kills.

I have published an Early Day Motion in the House of Commons calling on the Government to take note of this research and to commit to halting further privatisation in the NHS. I am asking MPs to sign to show their opposition to NHS privatisation.

Let’s return to Aneurin Bevan who also famously said that “the NHS will last as long as there are folk left with the faith to fight for it.”

When I look at our health trade unions, the NHS campaign groups and public opinion more broadly, I see that there are many of us still with the faith to fight. Let’s pledge ourselves to do so.