‘These figures expose the privatisation plans as the shambles the industry always knew they were. Rather than struggling in the digital age, as ministers claim, Channel 4 is thriving.’ 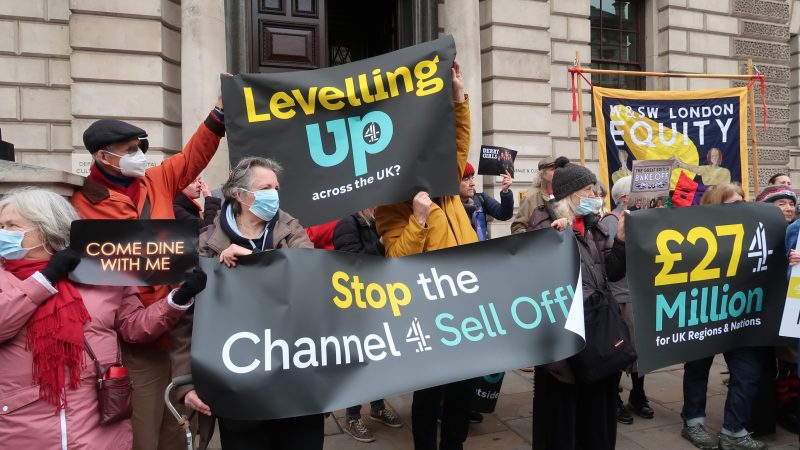 In what will come as a blow to the Tories’ plan to privatise the network, Channel 4 has reported a record-breaking financial performance.

In its ‘Channel 4 Annual Report 2021: A financial record-breaking year‘ published July 15, the TV network reported a 25% year-on-year increase in total revenues to a record £1.2bn in 2021. This is also a significant increase of 18% on 2019’s pre-pandemic revenues. The broadcaster also made a record-breaking pre-tax surplus of £101m.

In April this year, the government announced it was selling off Channel 4. The Tories claim that privatisation is needed so the channel can borrow money to compete with streaming giants like Amazon and Netflix. Culture secretary Nadine Dorries has been especially vocal that there needed to be an evaluation whether public ownership of the network was “sustainable and viable.”

The announcement of the privatisation plans created widespread uproar, with critics questioning the commercial logic of selling off the network and accusing the government of acting out of political dogma and score-settling. Polling found that the planned sell-off was the most disliked Tory policy with voters.

News that Channel 4 has net its most impressive financial performance to date has revived criticism towards the sell-off.

In June, We Own It, campaigners against privatisation and for 21st century public ownership, launched the ‘Channel 4 ain’t broke’ campaign. With support from leading production companies and a number of celebrities including Derry Girls’ star Siobhán McSweeney, the campaign is aimed at stopping the planned privatisation.

“These figures expose the privatisation plans as the shambles the industry always knew they were. Rather than struggling in the digital age, as ministers claim, Channel 4 is thriving.

“It has a first-of-its-kind deal with YouTube to control its advertising revenue. Its online advertising is up 40% year-on-year, 8 points higher than originally predicted!

“This strong financial performance is only outpaced by its impact: supporting levelling up for audiences and businesses.

“Its Leeds office allows creative entrepreneurs outside London to get into the industry, while its content, from comedies like Derry Girls to Rugby League coverage, allows us all to have pride in the places we call home.

“As the levelling up broadcaster, its unique business model supports 10,000 jobs, with hubs in Leeds, Glasgow, Bristol, and Cardiff. But privatisation puts this at risk, with cuts to 1 in 3 regional jobs predicted under a private Channel 4.

“In short, Channel 4 ain’t broke! So why put it at risk?” Topham asked.

Alex Mahon, chief executive of Channel 4, said the results show the network is in the “most robust health it has ever been.” She added that the network’s currents business model, of being publicly owned but entirely commercially funded with a non-profit remit to provide challenging and distinctive broadcasting,  delivers “dynamic growth, revenue diversification and long-term sustainability.”

Describing Channel 4 as a “vital institution,” Mahon added: “It is about showcasing things that people might not agree with and that challenge perceptions. It’s about celebrating the rich diversity not only of all our communities across the UK, but also their diversity of thought and opinion.”

‘Leave privatising Channel 4 behind with Boris!’

While Boris Johnson signed off plans to sell-off Channel 4 to private ownership, the Tory leadership candidates are being urged to commit to halting the sale.

As part of the Channel 4 Ain’t Broke initiative, sixteen independent production companies have written an open letter to the leadership contestants. The companies, which include many behind some of the most popular TV programmes like Peaky Blinders, state how, as a publicly owned broadcaster that is funded by advertising, Channel 4 does not cost anything to the taxpayer. Instead, it creates millions of pounds to the economy, while supporting thousands of jobs and training opportunities.

Despite efforts to halt the sale and widespread criticism over the plan, Rishi Sunak, one of the two remaining candidates, has pledged to push ahead with the privatisation of Channel 4, if he becomes prime minister.

Liz Truss, the other candidate in the race to No 10, is also believed to support the sell-off of the channel, though this has not yet been confirmed.