More than 40,000 workers are expected to walk out today, with a second strike planned for Monday. 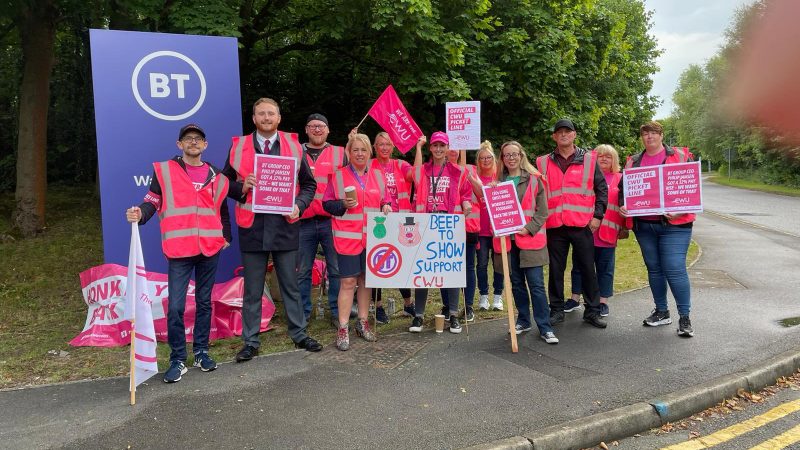 Thousands of BT and Openreach workers have begun a strike over low pay in what is the first national telecoms strike since 1987 and the biggest ever among call centre workers, according to the Communication Workers Union (CWU).

More than 40,000 workers are expected to walk out today, with a second strike planned for Monday.

Engineers and call centre staff voted in favour of industrial action after BT offered a £1,500 per year pay rise. The company has said that it will not be re-opening its 2022 pay review.

Picket lines are taking place across the country, with BT revealing its first sales growth for five years on Thursday. The telecoms giant has benefitted from price increases for customers earlier this year.

BT Group announced this week that the company made post-tax profits of £422,000,000 between April and June alone. The group’s CEO Philip Jansen has had a 32% pay rise to £3.5m a year, while at the same time BT group has also set up a foodbank for its own underpaid workers.

Commenting on the latest profit figures, CWU general secretary Dave Ward said: “Announcing hundreds of millions of pounds in profit on the eve of the first national strike since 1987 smacks of arrogance and complete contempt for frontline workers.

“This dispute sits squarely at the feet of chief executive Philip Jansen. He represents everything that needs to change about big business in Britain.

“This is one of the worst examples of the corporate greed that people are so fed up with in Britain today.

“Workers at BT Group will never accept their bosses using Swiss banks while they use food banks. They deserve a proper pay rise, like all workers do.”