Right wing attacks on rail unions do not seem to be translating into public opposition to the strikes. 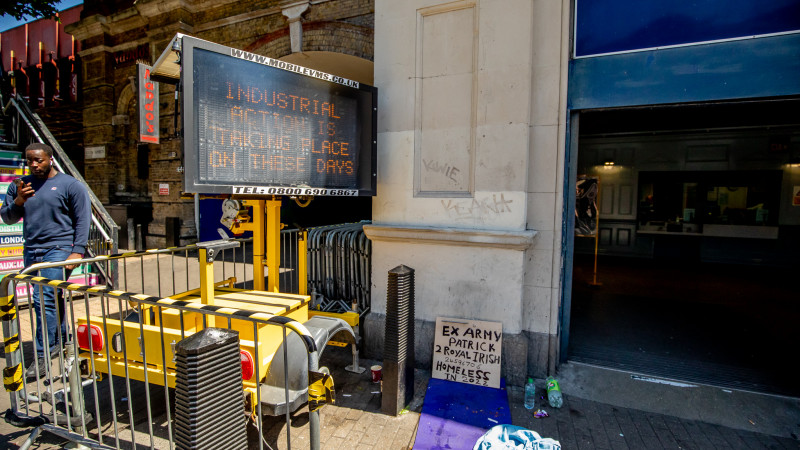 With many people working from home for the past two years, and the cost of living crisis compounding forty years of wage stagnation, the right wing media’s hysterical attacks on unions advocating for higher wages don’t seem to hit quite as hard as they might have in the past.

Some commentators and Tory insiders have referred to this week as ‘wedge week’, in which the government throws red meat to its backbenches and voters in the form of fights on Brexit, immigration and labour strikes.

The calculation is that going to war with the unions is a vote winner is a gamble. Smashing the power of organised labour has a long tradition in the Tory party, making them think lovingly of the Battle of Orgreave and police on horses beating miners – but you can’t get into the same river twice, and it’s not clear that pushing the big ‘smash labour’ button in Tory central office will have the effect desired.

The campaign to convince the public to not support the rail strikes this week is about hitting all these old talking points. Train drivers are greedy, entitled, selfish, stopping people from getting to the office jobs they don’t seem that keen to get back to.

Unlike in the 80s, however, the media landscape is much more fragmented. The BBC was certainly doing its part to try to make the unions look bad, writing a sentimental article about a handful of people who would be inconvenienced by the strikes – a bizarrely personal framing which makes you wonder who was responsible for commissioning it. But even with new right wing channels like TalkTV and GB News doing their best to attack the strikes, anti-union voices haven’t been able to monopolise the debate.

The main Tory tactic was to blame the strikes on the Labour Party. Considering that Labour leader Keir Starmer has specifically not publicly supported the strikes and told his shadow cabinet not to join picket lines, this tactic seems pretty ridiculous. Labour have not been in government for over 12 years now, so it’s hard to see anybody but the most diehard Tory supporter buying this.

It’s important to remember in this context that MPs got a £2,200 payrise this year on top of their existing salary of £82,000 a year. As far as I recall, no strikes were needed to secure this pay rise, and nobody has said that this increase contributes to inflation.

My favourite TalkTV shock jock, Mike Graham, was having a very normal one, accusing railway workers of trying to destroy the country. This kind of demagoguery is what you have to expect from TalkTV as it struggles to attract the most reactionary British people with pure angry vibes.

On television too, I don’t get the impression that the angry denunciations of presenters really did much damage to the RMT and their striking members. Sky News’ Kay Burley repeatedly asked the RMT’s Mick Lynch what picketers would do if agency workers decided to cross a picket line. Lynch, who was standing in front of a picket line, simply pointed to the strikers behind him to show what they were doing.

Lynch had a pretty good day doing public relations for the RMT, telling Good Morning Britain’s Richard Madeley he was talking “twaddle” as the presenter tried repeatedly to get the unionist to say whether he was a Marxist, and repeatedly called Chris Philp MP a liar in a most satisfyingly no bullshit way.

Praise for Lynch’s TV appearances was one of the notable features of the day’s media battle over the strikes. Journalist Tom Usher said on Twitter that “having on a guy who doesn’t give a shit about a long term media career makes nearly every political TV appearance look absolutely ridiculous by them not having to appease whatever deranged shit they say”.

And there was clear evidence from some public polling yesterday that a majority of the public do support the strikes – 58% according to polling company Comres.

The battle over rail workers’ pay could prefigure a wider set of strikes in other sectors. The rail unions are among the UK’s strongest, and there is clearly fear among the right wing press that successful industrial action by the RMT could encourage other unions to go on strike. Tory peer and former chancellor Ken Clarke said that the strikes “cannot be allowed to look successful”.

This is why this battle is so important, and why the Mail has opted for the hyperbolic language of contagious disease to describe workers demanding better pay during a cost of living crisis.

Teachers, doctors, bin men and other frontline service workers kept the country running during the pandemic, yet are being told not to ask for pay rises. Ordinary people are struggling – inflation has hit 9.1% today, and so it makes sense that ordinary people would understand workers striking for better pay.

Mick Lynch, speaking on Sky News, reminded viewers that during 2020, when the government had to increase rail subsidies because of the fall in revenue, rail companies made £500 million in profits which went to rail bosses and shareholder dividends. Polling by YouGov in May 2022 shows that about 60% of the British public would support rail nationalisation.

People know that trains are too expensive in the UK and often poorly run by the private sector. Could it be that after two years of a pandemic in which frontline workers were the nation’s heroes while the government was breaking its own rules, that the public is just more likely to support public sector workers in a fight with an unpopular government?