Through wage freezes and cuts, the government is waging class war on workers 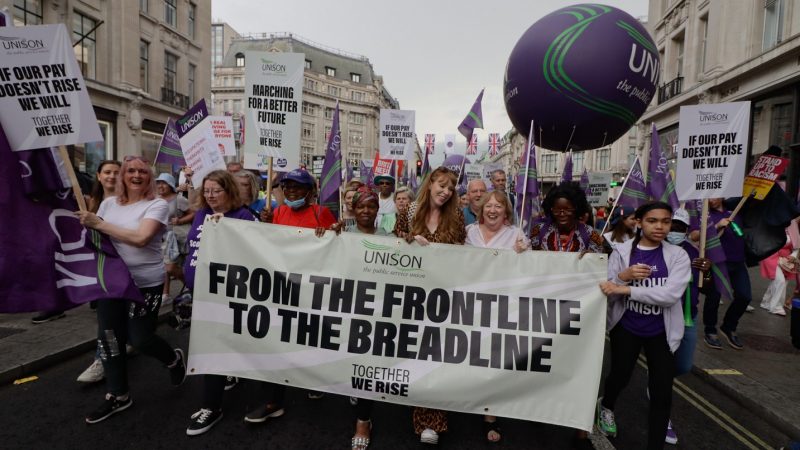 The UK’s economic woes are deepening. The rate of inflation, as measured by the Retail Price Index (RPI), has hit 11.7%. It is the highest rate of inflation in the G7 countries. Average pay is lagging far behind inflation and increased by only 4% for the year to May. Public sector employees have fared even worse. They have faced wage freezes since 2008 and the National Health Service workers are relying upon food banks.

Further shocks to household budgets are on the way. Food prices are expected to rise by 20% in the first quarter of next year. The average domestic bill for energy is expected to increase by another £800 in October.

Faced with a squeeze on incomes and higher price for food, energy, transport and other essentials, the number of people living in poverty is expected to increase from 14.5m to 16m. Charities have provided more than 2.1m parcels of food to people facing financial hardship, including 830,000 to children. Low wages are blighting life. Some 41% of universal credit claimants are in work. Around 68% of families living in poverty include at least one working adult.

According to the Office for Budget Responsibility, workers are facing the biggest fall in real incomes since 1956, when the record began. The Prime Minister’s response is to threaten workers with further pay cuts even though many companies are declaring record profits. The squeeze on workers’ pay is not accompanied by curbs on corporate profiteering, executive pay or bonuses in the finance industry.

The high rate of inflation and the cost of living crisis is primarily caused by corporate profiteering. Typically, a handful of companies dominate the oil, gas, electricity generation, grocery, banking, mining, basic materials, telecoms, water, pharmaceutical and other industries. Due to market dominance they are in a position to extract monopoly rents, especially as timid regulators have not broken-up giant corporations to increase competition or curb profiteering. Their profiteering has knock-on effects on the cost and operations of other businesses.

An analysis by Unite, the trade union, reported that profit margins of the FTSE350 companies, the biggest UK listed companies, were 73% higher in 2021 compared to the pre-pandemic levels in 2019. Even after excluding energy companies, FTSE 350 company profits increased by 42% between 2019 and 2021.

UK-wide company profits have jumped by another 11.74% in the six months from October 2021 to March 2022. In the same period, labour income only rose 2.61%; and fell by 0.8% after accounting for inflation. This profit jump is responsible for 58.7% of inflation in the last half year – as opposed to just 8.3% due to labour costs.

Another analysis by the Institute for Public Policy Research and Common Wealth reported that the profits of the largest non-financial companies were up 34% at the end of 2021 compared to pre pandemic levels. This increase is driven by a small number of companies, with 90 per cent of increases in profits accounted for by only 25 companies. Increased profits have been used to finance higher dividends and share buybacks rather than investment in productive assets.

Despite high profits, rip-off practices have continued. The government has provided billions in subsidies to roll-out faster broadband, but companies still charge exorbitant rates as the market is dominated by a handful of companies. Broadband contracts typically include clauses enabling companies to increase charges by the formula of RPI + 3.9%, that is an increase of nearly 16% a year. Connections don’t come cheap, especially for people living in sparsely populated areas. Residents in the Shetland Isles haven been quoted more than £700,000 to have their homes connected to superfast broadband. One resident received a quote of £725,000 by BT.

The government has done nothing to check excessive executive pay either. The Unite report states that between 2020 and 2021 average pay for the highest paid directors of the UK’s biggest listed companies increased by 29% from £2.01m 2020 to £2.59m in 2021. If anything, executive pay has further accelerated. The chief executive of the discount retailer B&M collected a pay packet of £5m, equivalent to 270 times the average B&M worker salary. Tesco’s chief executive collected £4.7m, equivalent to 224 times the average Tesco worker. Sainsbury’s CEO tripled his pay packet to £3.8m, 183 times larger than that of the average worker at the supermarket.

Bonuses in the financial sector have grown by 27.9% over the last year and are expected to rocket. After the 2007-08 banking crash and subsequent publicly-funded bailouts, the EU imposed restrictions on pay and bonuses. However, the government is set to abolish the restraints.

The government’s class war is impoverishing workers by imposing wage freezes and cuts. It all seems to be part of a social engineering project to discipline workers and further subjugate them to the power of capital. The class politics become more visible when it is noticed that there are no curbs on profiteering and executive pay. Such policies will deepen inequalities and hardship; fuel resentment and ferment social disorder. We need a government of the people and for the people.